Uncovered: The first cause-and-effect relationship between a gene variant and aortic calcification 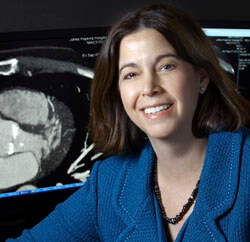 These study findings, says Wendy Post, help us better understand how valve calcification develops and may spur new avenues of therapy, possibly with drugs that lower lipoprotein (a).

Understanding the biology of aortic calcification and learning why the condition runs in families has been a major challenge. It would require sifting through millions of gene variants in large population cohorts and knowing which of those subjects had evidence of aortic valve calcification. Johns Hopkins cardiologist Wendy Post and colleagues at several institutions undertook that challenge. They conducted the first large-scale, genome-wide association study to try to uncover a genetic link to aortic valve calcification.

They found that having a genetic variant in the LPA gene, which codes for the cholesterol particle lipoprotein (a), doubles the likelihood that patients will have calcium deposits on their aortic valve.  That variant also increases the risk of developing aortic stenosis by more than 50 percent.

“Our study not only helps explain why calcification may run in families, it opens the door to the development of targeted medications to slow the progression of the disease,” says Post.  Such new therapeutic approaches are needed since statins have not been shown to reduce aortic valve calcification.

The researchers first looked at 2.5 million single nucleotide polymorphisms (SNPs), among more than 6,900 people of white European background, and found that this variant in the LPA gene was strongly associated with having aortic valve calcification on a heart CT scan.

Once the researchers identified the association between the LPA gene variant and those with evidence of aortic valve calcium in that first group, they confirmed their findings among three other groups — more than 2,000 people of Hispanic origin, about 2,500 African-Americans and more than 700 Germans.

The people in those three groups, as well as the initial 6,900 Caucasians, were participants in several ongoing studies — the Multi-Ethnic Study of Atherosclerosis (MESA); the Framingham Heart Study; the Age, Gene/Environment Susceptibility (AGES) study in Iceland; and the Heinz Nixdorf Recall study in Germany. All had previously undergone a CT scan to look for the presence of aortic valve calcium.

The researchers also were able to demonstrate an association between the LPA gene variant and the future development of clinical aortic stenosis in two independent groups — more than 28,000 research participants in Sweden and more than 10,000 participants in Denmark.

“Advancing age is a major risk factor for aortic stenosis, which is the most common form of valve disease. With the aging of the population, this will become an even bigger health concern,” says Post.

The study was funded by multiple grants through the National Heart, Lung, and Blood Institute as well as other funding agencies. It was published in the February 7, 2013 issue of the New England Journal of Medicine.