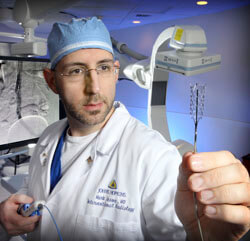 When Paul Cigan, a clarinetist with the National Symphony in Washington, D.C., came to see interventional radiologist Mark Lessne this past fall, he had spent almost nine years coping with blood clots in this legs that had gotten progressively worse. His inferior vena cava (IVC) was completely blocked below his kidney and his left and right common iliac veins were occluded, as well.

“I was really in bad shape,” says Cigan. “I was getting ulcers in my legs because the circulation was blocked. The swelling was painful and I had trouble getting around. I felt tired all the time.”

His problems began in 2004 due to lupus anticoagulant syndrome, an autoimmune disorder that promotes the formation of blood clots. As time went on, his local doctor had tried various doses of anticoagulants, but they had stopped working.

“We accessed the popliteal veins behind his right knee, which ended up being a dead end because of the extent of the blockage in his thigh. So then we went into his common femoral veins on both sides of his groin and into his right internal jugular vein,” says Lessne. “That allowed us to cross the blocked common iliac and IVC veins from above and below, coming from the neck and groin, and we opened the blockages with balloon angioplasty and stents. We then reconstructed the iliac vein and his IVC with three overlapping stents.”

Years earlier, doctors had placed an IVC filter to prevent clots from traveling to Cigan’s lungs. “Those filters can be lifesaving,” says Lessne, “but unfortunately, if they are kept in too long, they can also cause problems. In this patient, the filter contributed to his IVC getting blocked.” Part of the reconstruction performed by Lessne involved traversing the occluded IVC filter and stenting through it.

Lessne notes that on some occasions when the traditional wires are not sufficient to go through blockages, he uses a wire with a radiofrequency device to dissolve the blockage.

“The procedure at Hopkins changed my life in so many ways,” says Cigan. “I felt better immediately afterward. Now, the pain and swelling are gone and the sores on my legs have healed. My breathing capacity is better—and that’s important for playing the clarinet.”