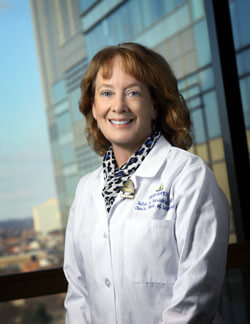 At age 19, Trevor Kozlow’s goal was to join the ROTC program at the University of Maryland. He’d been a competitive swimmer for much of his life but thought he needed to develop his upper body strength even more to be accepted into the program. So he began an intensive, two-year regimen of lifting weights and doing push-ups and overhead presses.

One day, at the college gym, a friend noticed that his right arm was purple and swollen. “It felt a little tingly, like I had slept on it, but when I saw it, there was definitely a big problem,” he says. An ultrasound pinpointed the cause—a blood clot in his subclavian vein, which is one of the three causes of thoracic outlet syndrome. Kozlow was put on anticoagulant medication and referred to Julie Freischlag, the surgeon-in-chief at Johns Hopkins who is one of the nation’s leading experts in treating thoracic outlet syndrome.

“Only about 3 percent of patients with thoracic outlet syndrome have the venous form of the condition,” says Freischlag. “They usually are young men who are involved in strenuous athletic activity. As they develop their anterior scalene muscle, it becomes so large that it presses on the vein. It is an acute problem that requires surgery.”

The typical procedure is a scalenectomy with first rib resection, in order to stop the compression on the vein. Dr. Freischlag performed the operation for Kozlow in August 2011.

Following surgery, patients like Kozlow take an anticoagulant for a month or two. They have a venogram two weeks after the surgery to make sure the vessel is wide open. If it is not, Freischlag uses a balloon to dilate it. While it is possible for the vessel to become narrow over time, she says, the risk of developing a new clot in the same location is very low.

As a precaution, Kozlow had the same surgery on his left side nine months later. “I was told there was a 60 percent chance that I could develop a clot in the vein on the other side, and that could have been dangerous,” says Kozlow, who has now turned his athletic interest to running.

While the venous form of the disorder is rare, the vast majority of thoracic outlet syndrome cases are neurogenic, the result of chronic repetitive arm movements or a traumatic injury that irritates nerves in the collarbone. Women are more likely than men to have the neurogenic form. “Some patients suffer with symptoms for years before a correct diagnosis is made. It is important for patients to have a duplex ultrasound performed at a certified vascular lab in order to properly diagnose thoracic outlet syndrome,” Freischlag says.

Physical therapy for six to eight weeks helps the majority of patients with the neurogenic form of the disorder feel better. Some are prescribed injections of lidocaine or botox in addition to physical therapy to relieve the symptoms, which include pain and weakness in their arms and hands, as well as swelling and tingling. Freischlag and colleagues are now performing a randomized study comparing repeated botox injections to surgery in patients with neurogenic thoracic outlet syndrome.

The third and rarest type of thoracic outlet syndrome after neurogenic and venous is arterial—with a blood clot in the subclavian artery that causes pain, claudication and decreased pulses. In that case, surgery may be needed on an emergent basis.

Freischlag leads a center of excellence in thoracic outlet syndrome at Johns Hopkins, which includes vascular surgeons, physical therapists and specialists in pain management. “It is most rewarding to see patients like Trevor get back to their active lives,” she says.