Cardiomyopathy is often the first sign of Barth syndrome, a rare, multifaceted disease 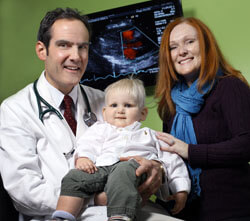 Connor Woodward, shown here with his mother, Stacey, has been cared for by cardiologist Reid Thompson since he was 18 months old.

At 30 months of age, Connor Woodward looks perfectly healthy. You wouldn’t think that he has Barth syndrome – a life-threatening genetic disease that often first presents during infancy as dilated cardiomyopathy. The disease affects one in about 400,000 children born in the United States. Connor is thought to be the only child in Maryland with the syndrome.

At birth, Connor was not breathing and he was transferred from a community hospital to the neonatal intensive care unit at the Johns Hopkins Children’s Center. After 10 hours on a ventilator, he was breathing on his own but he was identified as having cardiomyopathy. The quest began to find out the cause.

"He was tested for a variety of problems, including Barth syndrome, and the results came back negative," says Connor's mom, Stacey Woodward. It turns out that he was too young for the test to show a positive result.

"As time went on, he had significant growth delays," says Woodward. "We had him tested again for Barth syndrome at 18 months and the result was positive. We were devastated at first but it was also comforting to know the cause."

Barth syndrome, first identified in 1983, is caused by a mutation in the X-linked tafazzin gene, which is crucial for maintaining energy production in the mitochondria. In addition to cardiomyopathy, the syndrome causes neutropenia, muscle weakness, and growth delay that is not responsive to growth hormone. The most dangerous aspects are heart-related complications and the risk of severe infection due to a chronically low white blood count. Only boys are affected.

Patients are given medications typically used to treat heart failure, including ACE inhibitors, diuretics and beta blockers. They also take an amino acid supplement because the condition causes a deficiency in arginine.

"If we maintain their health through infancy with supportive heart care, their prognosis is good," says pediatric cardiologist Reid Thompson. "The riskiest time for these patients is during the first year of life and then again in puberty, when they require more protein and their heart and other muscles are demanding more energy to function properly."

Thompson is one of the physicians on the team who care for patients from around the country at a multidisciplinary Barth syndrome clinic – the only one in North America. The group also includes pediatric specialists Hilary Vernon, Clifford Takemoto and Richard Kelley. Patients are seen at Johns Hopkins’ neighboring institution, the Kennedy Krieger Institute.

The clinic also provides an opportunity to study the disease. "It"s been hard to learn more about this syndrome," Thompson says, "because there are so few patients." At most, about 10 boys are diagnosed each year in the United States.

Kelley, a pediatrician and metabolic specialist, has been studying and caring for patients with Barth syndrome for more than 25 years. "It’s difficult to treat because it doesn’t conform to the usual model of mitochondrial diseases and doesn’t respond to typical metabolic treatments," he says. "Multiple systems are involved and we need a comprehensive approach to the cardiac disease, neutropenia and delayed growth aspects of the disease."

Because the condition is so rare, Kelley says diagnosis is often delayed until age 3 or 4, and children may be misdiagnosed as having viral myocarditis or dilated cardiomyopathy.

"Early diagnosis is important because the medical therapy works very well and the heart disease can be controlled," says Kelley.
Connor’s mom says his heart is doing OK and he has been able to avoid infections. "Through a Barth syndrome support group, we have met some wonderful parents of other children as well as young men in their 20s who were just diagnosed," says Woodward. "With continued research, we are hopeful that Connor will be able to live a long and healthy life."

Connor Woodward, shown here with his mother, Stacey, has been cared for by cardiologist Reid Thompson since he was 18 months old.