A better quality of life for patients with heart failure. 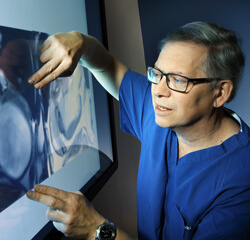 One of the advantages of left ventricular remodeling surgery, says John Conte, is that it doesn’t prevent a patient from receiving a heart transplant or ventricular assist device if needed in the future.
photo by Keith Weller

It is not at all uncommon for physicians to consult John Conte about surgical options for their patients with heart failure. He’s one of the few cardiac surgeons in the U.S. whose toolbox includes left ventricular restoration (LVR), in which he surgically restores the geometry of a malformed left ventricle to its normal shape, or as nearly as possible. Conte has performed hundreds of LVR procedures, often for patients who are not quite sick enough for a ventricular assist device (VAD) or heart transplant but whose quality of life is severely compromised.

Among Conte’s recent patients is Jack Brown, 61, who had two massive heart attacks in 2009 and could barely walk up stairs any longer without feeling worn out. After 20 years of running his own photography business, he found himself too exhausted to carry on.

“My doctors in Philadelphia,” Brown says, “sent me to The Johns Hopkins Hospital because of Dr. Conte, and because they could take MRI pictures of my heart, even with my pacemaker and implanted defibrillator.”

Brown is referring to the protocol Johns Hopkins cardiologists developed to determine which devices and leads can safely go into the MRI and reprogram each device so its electronics won’t mistake the MRI radio frequency for an arrhythmia. LVR, says Conte, is most appropriate for patients with moderate to severe heart failure whose ejection fraction has dropped to less than 35 percent, and who have had a clearly defined left ventricular enlargement and, most importantly, demonstration of nonviability via MRI.

“When Dr. Conte showed me the pictures of my heart and explained how the operation works,” Brown says, “he completely gained my confidence.”

Although a 2010 study named the STICH trial (Surgical Treatment for Ischemic Heart Failure) called into question the benefits of LVR, Conte and others say the results were based on flawed comparisons and have since been revised to show good outcomes.

“In the right patient, in an operation done by the right surgeon,” says Conte, “LVR provides favorable five-year outcomes that are equivalent or superior to transplantation and superior to VAD implantation, at a fraction of the cost and without side effects from immunosuppression or a need for anticoagulants.”

“The whole thing from start to finish has been a blessing,” Brown says. “Now, I’m back to 90 percent of where I was before the heart attacks.”