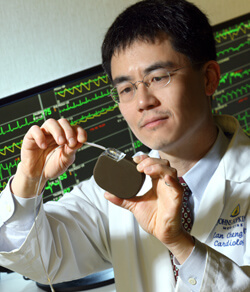 The Achilles’ heel of implantable cardioverter defibrillators is the risk of infection or a broken lead. But Johns Hopkins electrophysiologist Alan Cheng is now providing another option to selected patients: a subcutaneous implantable cardioverter defibrillator whose wires are placed just under the skin instead of into cardiac vessels or the heart itself.

The implantation requires the patient to have general anesthesia but not fluoroscopy. The device’s pulse generator is placed right below the armpit using a 6-inch incision. Then, an electrode attached to the device is tunneled across the heart above the ribcage and is attached to the fascia. “The device senses off the lead placed under the surface of the chest and should have improved discrimination between supraventricular and ventricular arrhythmias,” says Cheng. “The main advantage is that patients will not face the risk of difficult lead extractions in the future, but one must also keep in mind some drawbacks.”

The battery needs to be replaced after about four years. The device is also about twice as large as a traditional ICD, so not all patients—especially those who are very thin—are eligible. In addition, because the detection algorithm uses a virtual surface ECG (via the subcutaneous lead), some patients may not qualify for the device due to T wave oversensing. It also does not have standard pacing support or the ability to deliver antitachycardia pacing (ATP), so it would not be offered to patients with symptomatic bradycardia or slow ventricular tachycardia that may be amenable to ATP. Nevertheless, it is a good option for some patients with limited vascular access or other issues placing them at high risk for bloodborne infections.

Cheng says time will tell how effective the new device will be. “We have 30 years of experience with the traditional ICD versus about one year with the new one,” says Cheng. But, he adds, it does hold promise for patients who are good candidates.