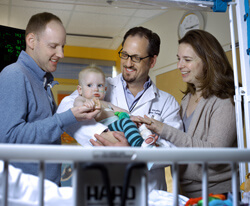 When 9-month-old Duncan Scott was wheeled into the operating room on May 1, he was about to have surgery for the most common type of congenital heart abnormality, a ventricular septal defect. But the case was far from routine. His was the first surgery to take place in Johns Hopkins Hospital’s brand new, dedicated pediatric cardiac surgery operating room, and it was one of the first scheduled operations in Hopkins’ new 1.6-million-square-foot building, which has a total of 33 operating rooms.

“It is the most amazing operating room I have ever worked in,” says Luca Vricella, the cardiac surgeon who operated on Duncan. “It’s very large, giving us the ability to move around efficiently. The lighting is spectacular. All of the equipment is attached to beams suspended from the ceiling so there is nothing on the floor to get in our way.”

The pediatric cardiac OR is part of a suite of 10 operating rooms dedicated to pediatric patients, while six other operating rooms in the new building are devoted to adult heart and vascular procedures. The new facility’s official May 1 opening followed a carefully choreographed, two-day move of patients into the 560-bed facility.

“The video and integrated imaging capabilities are extraordinary,” Vricella says. “With eight large flat-screen monitors and an overhead camera focused on the operating field, everyone participating in the case from any corner of the room can see exactly what’s happening and know the next steps. If I need to pull up the catheterization images or other information during a case, I can easily do it—it’s displayed right in front of my eyes.”

Vricella and his colleagues now have the ability to stream crystal-clear live video of the operation to any computer or store it for later. They’ll use it for teaching purposes: Colleagues can watch the procedure from their offices, and the video could be sent to a referring physician who would be interested in seeing the surgery.

Duncan’s surgery went very well. Vricella closed the defect by lowering the tricuspid valve; there was no need to put mesh in place. Although the infant had presented with a large ventricular septal defect and substantial cardiac enlargement, he made an excellent recovery in the 40-bed PICU located in the new hospital’s Charlotte R. Bloomberg Children’s Center and was discharged from the hospital five days after surgery.

Duncan’s parents, Ellen and Dan Scott, were living in Hawaii when Ellen became pregnant. An ultrasound at 21 weeks showed that the baby had a ventricular septal defect that would require surgery. Dan, who is a major in the Marine Corps, requested a transfer to Baltimore so that the baby could be delivered at Johns Hopkins. Duncan’s heart surgery was delayed several times until May 1 due to respiratory infections. Duncan also has a mild case of DiGeorge syndrome and is under the care of several Hopkins specialists.

“We had some initial concern about Duncan being the first case in the new operating room,” says Ellen. “But Dr. Vricella assured us that everything was in place and it would be fine. It is a beautiful facility, and we especially liked the fact that his room in the PICU was large enough with a sofa and a reclining chair so that we could both stay overnight and be right by his side.”

Vricella calls the building, with its high-tech capabilities and patient amenities, a new beginning. “Our patients will benefit from world-class technology and care in a hospital that is truly patient- and family-centered.”

Vricella also says that having a dedicated pediatric cardiac operating room will make patient access to Hopkins more streamlined and efficient, with less chance of delays or cancellations.

“Hopkins is known for pioneering the blue baby operation in 1944. The Blalock-Tausig procedure revolutionized cardiac surgery, so the fact that the first surgery in our brand new building was a procedure to correct a congenital heart defect was an inspiration to all of us,” Vricella says.