A noninvasive method gets to the heart of endothelium function 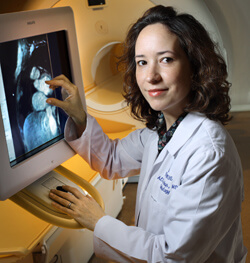 Allison Hays is studying the response of the coronary arteries to specific stressors.
photo by Keith Weller

The endothelium that lines coronary arteries is like a canary in a coal mine. Changes in the function of endothelial cells are the early warning signs of the effects of smoking, hypertension, lipid disorders and diabetes, and are harbingers of dangers to come, such as atherosclerosis, inflammation, calcium deposits and heart attacks.

The quest to noninvasively assess the endothelium of tiny coronary arteries has been challenging. In past studies, for example, researchers used ultrasound to look at the brachial artery in response to stress, such as immersing the arm in ice water or briefly restricting arm circulation. Those methods revealed some important clues about the vessel’s ability to dilate.

“Patients with such early changes would not normally be recommended to have cardiac catheterization,” says Weiss, “yet this new information could prove valuable for their care.”

In the first-ever use of magnetic resonance imaging to look at the endothelial function of coronary vessels, the team conducted a study* involving 20 healthy volunteers and 17 patients with established coronary artery disease that was previously documented by coronary catheterization within the past six months. To create a form of stress that would test the function of the endothelial cells, the researchers asked all participants to continuously squeeze a handgrip device, a dynamometer, for four minutes while the MRI machine zeroed in on their coronary arteries.

“We measured coronary artery size and rate of blood flow using MRI before and during the isometric handgrip exercise,” Hays explains. “In healthy individuals, the stress caused an increase in vessel diameter and blood flow. In patients with coronary artery disease, the vessels did not dilate normally and there was no increase in blood flow.”

“Most people would not have predicted that you could see changes in these 2- to 3-millimeter arteries in the beating heart in a noninvasive way,” adds Weiss. “But our findings were entirely consistent with information previously reported from cardiac catheterization studies.”

To prove that they were truly assessing endothelial function responses, some study participants were given a sublingual tab of nitroglycerin while they were still in the MRI machine. Everyone’s arteries dilated. However, that same dilation was only seen among the healthy volunteers during the handgrip exercise, indicating that researchers were, indeed, gauging endothelial responses.

In a subset of patients, they measured two of the coronary vessels using MRI. Each patient had one vessel with mild disease (as revealed in the cardiac catheterization) and another with severe disease. “We found that the extent of coronary endothelial dysfunction was related to the degree of stenosis in that artery,” says Hays, “showing a spectrum of endothelium dysfunction within heart arteries in each individual patient that had not been established before.”

The MRI technique is not yet ready for clinical use, says Weiss, “but I do think it’s a new way of approaching atherosclerosis. Much of our current work is related to the anatomy of the blockages and how severe they are. But this is more about physiology than anatomy”

* Journal of the American College of Cardiology, November 2010