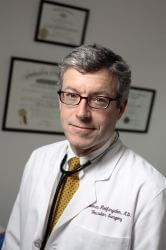 “People have this idea that limb salvage surgery on the lower extremity is only a temporizing measure,” says Thomas Reifsnyder. “They think that people who come in with gangrene or an infection in their foot are going to end up with an amputation.”

But Reifsnyder, who heads vascular surgery at Johns Hopkins Bayview Medical Center, has made it something of a personal mission to not merely treat but actually save the limbs of patients with diabetes or other conditions that cause circulation problems in the legs and feet. In fact, he says, “95-plus percent of the time, that limb can be saved, and most of the bypasses we do actually outlive the patients.”

That doesn’t mean Reifsnyder considers effective limb salvage operations simple. “Sometimes,” he says, “we have to get a little tricky with them, and unless you’ve done a lot of these procedures, they can seem pretty daunting. But if you can do them efficiently and with sophistication, you end up saving most—not all, but most—of those legs.”

One element for succeeding that Reifsnyder considers key is having basic vascular surgery training.

Although guide wires, balloons and stents have made a significant difference in the way endovascular surgery and therefore limb salvage is being done, he says, “if you aren’t trained and experienced in general vascular surgery, limb salvage operations that involve piecing together useable veins can take eight to 10 hours instead of three to five hours to complete.”

Whether it’s reconstructing the foot by rotating tissue flaps, artful transmetatarsal amputation or complicated bypass surgery to transplant veins from one portion of a patient’s legs or arms to another, Reifsnyder believes that “it takes practice and a broader understanding of what might be involved” to keep operating time to a minimum and outcomes good.

“Most leg bypasses,” he says, “should only take two to four hours, even if they’re re-dos, even if you’re using veins from patients’ arms—they shouldn’t be all-day cases. Patients do well with that. Frequently you can do these cases as quickly as you could do an angioplasty or a stenting.”

Another reason Reifsnyder relies on his grounding in general vascular surgery when it comes to limb salvage, he says, is that endovascular techniques tend to be more appropriate for aneurysm disease or lower-extremity problems such as claudication or pain while walking. “In other words,” he explains, “the limb wouldn’t die if you didn’t do anything. But most of the leg bypasses I do, if you don’t do something, the patient is going to end up with amputation.”