Cardiovascular Report - Anticoagulation in the Elderly

Anticoagulation in the Elderly 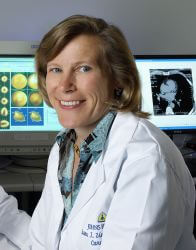 Older patients, says cardiologist Susan Zieman, are much more afraid of having a stroke than they are of dying. And because of that, when they’re given the opportunity to make informed choices, more opt to take an anticoagulant than those who don’t.

This expressed desire by older adults, plus the fact that 80-year-old atrial fibrillation patients have up to a 23 percent risk of stroke, is why Zieman advocates chronic anticoagulation therapy, which can reduce stroke risk by 60 percent.

Despite plenty of good data to support that approach, however, misperceptions still prevail.

One assumption, says Zieman, who specializes in treating patients age 70 and older, is that mature patients will inevitably fall and then be at risk for life-threatening bleeds. “Physicians tend to underestimate the risk of stroke in older patients by 22 percent and overestimate the risk of bleeding by 670 percent,” she says, when in reality an older patient would need to fall nearly 300 times a year for warfarin not to be the optimal therapy for stroke protection in atrial fibrillation.

Bruising is likely to happen with falls, but not serious or life-threatening bleeding. “Because their center of gravity can shift behind the body’s center with age,” Zieman says, “these patients have low-velocity falls and tend to plunk down rather than fall forward.” A simple home-safety check that results in getting rid of hazards such as throw rugs, installing cordless phones and enhancing lighting can go a long way toward reducing falls, as will screening for low vision.

Another stumbling block to using anticoagulation therapy—for everyone involved—is that patients who take anticoagulants (or their caregivers) need to be vigilant about what they eat, keep careful records of all other medications they take (including herbal remedies) and have their blood levels monitored regularly. Physicians, too, voice concerns about inconveniencing patients who, once starting warfarin, will need to be monitored at least monthly and perhaps as frequently as every three weeks.

This level of ongoing management may be inconvenient, but, says Zieman, it can be offset by rigorous patient education, home testing, and monitoring through an anticoagulation clinic.

“As physicians, we need to be cautious about superimposing our own value system onto these patients,” says Zieman. “We may think they hate to be monitored, but they generally enjoy getting out to see people and actively participating in preventing their worst fear from happening.”