Cardiovascular Report - A Disorder Tortuous in More Ways Than One

A Disorder Tortuous in More Ways Than One 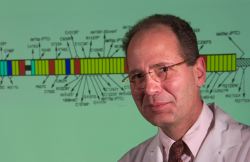 There may be only a couple dozen cases in the literature, but Hal Dietz is well acquanted with the syndrome’s unusual constellation of symptoms.

After being rushed to the emergency department of a local hospital, where imaging revealed a congenital hiatal hernia, the 1-month old was swiftly transferred to the neonatal intensive care unit at the Johns Hopkins Children’s Center. There, the patient showed signs of hypertension in her upper extremities, while blood pressure in her lower extremities was normal. Even more unusual was what preliminary imaging of her head, neck and chest showed: hairpin turns and pigtail twists in her aortic arch and carotid and pulmonary arteries.

Called in to consult, geneticist Hal Dietz suspected something that—in his experience, at least— wasn’t so unusual. Given the child’s symptoms, imaging results and small, wide-set eyes, Dietz surmised a rare vascular disorder called arterial tortuosity syndrome, or ATS. Indeed, follow-up cardiac catheterization showed severe lengthening, narrowing and twisting of all of the child’s major arteries and severe hypoplasia of the aorta—hallmark signs of ATS that posed risks of aneurysm, infarction or stroke for the young patient.

Dietz found his way to ATS through his work with two related vascular disorders—Marfan syndrome and Loeys-Dietz syndrome (LDS), the latter characterized by the spiraling arteries, aneurysms and widely spaced eyes also found in ATS. In studying Marfan, Dietz learned that the disease is driven by too much activity of the growth-factor molecule TGF-beta, which was also found in the vessel walls of patients with LDS (named after Dietz and Belgian physician Bart Loeys). In looking at the vascular tissue in ATS patients who underwent surgery, they also saw a high expression of TGF-beta. More importantly, in studies of Marfan mouse models the researchers found that the hypertension drug Losartan had the ability to decrease the activity of TGF-beta, thereby reducing the risk of aortic aneurysm and other vascular complications seen in infants with ATS.

That’s important because therapeutic options are limited for ATS patients. Surgery is complicated in these cases and requires a long time on cardiopulmonary bypass. Recent advances in endovascular techniques have enabled nonsurgical treatment of aortic coarctation by balloon dilatation, but these elongated vessels most often tend to be too narrow for stenting. As in this case, physicians typically decide to watch and wait for arteries to grow. But knowing the gene defect for ATS has allowed Dietz and Loeys to screen family members and better understand the clinical spectrum of severity in ATS, opening the door wider to improved outcomes.

“If you pooled the world’s experience with ATS, as recently as three years ago you would have concluded that this condition is uniformly fatal in infancy or very early childhood,” says Dietz. “Now we can at least offer families hope that their child will be able to survive and have a reasonable quality of life. With close follow-up and aggressive surgical interventions when appropriate, the chances for patients like this child are greatly improved.”