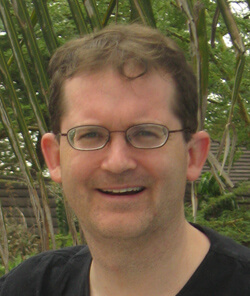 Early in his studies at Baylor University School of Medicine, Jon Fielder met—and came to revere—Osler-trained mentor Richard Goodgame, a devout Christian who spent 10 years teaching at a medical school in Uganda. Following Goodgame’s example, Fielder matched in internal medicine at The Johns Hopkins Hospital. But first, he spent a year volunteering in India. The experience solidified his aspirations to pursue a career in missionary medicine.

Since completing his Osler training in 2002, Fielder, 43, has served as a medical missionary in Malawi and Kenya, primarily caring for patients with HIV. He co-founded the African Mission Healthcare Foundation and serves as its executive director. Fielder is also the author of Tuberculosis in the Era of HIV, a popular handbook used in several African nations. In addition, he provides clinical support to several East African hospitals and clinics, and he lectures widely. Fielder lives outside Nairobi, Kenya, with his wife, Amanda, a social worker, and three children.

It’s been wonderful. My original plan was to come back and train in infectious disease, but the needs were so great here. In 2004, President George W. Bush’s emergency plan to fund AIDS drugs made a huge difference. When I first arrived in Kenya, only about 60 people received treatment at our hospital. Now, 5,000 are getting antiretrovirals. There aren’t nearly as many orphans. In 2009, we moved to Malawi, which is less developed. Malawi has 7,400 HIV-infected patients for every doctor. I helped grow an existing HIV clinic before moving back to Kenya six months ago. Life isn’t easy here, but the people are incredibly warm and community oriented; the work is gratifying. And my kids like their international school. We feel blessed.

How did the Osler residency program prepare you for this role?

It prepared me extremely well on many levels. First, a significant number of  people in Baltimore have HIV. The expertise at the Moore Clinic provided a great opportunity to learn how to manage the disease. In addition, I was exposed to a variety of patients. Because of the broad Osler experience, I know how to use diverse drugs and technology. The program also prepared me to be radically committed to the patient. You can get discouraged here—and I have been—but the values I picked up at Johns Hopkins and my faith have guided me.

I don’t have a typical day. I divide my time between seeing patients in clinics, teaching, house calls and administrative work. But because of the foundation, friends and I also started to help the hospitals here, so travel consumes much of my time. Every six weeks I check on clinics throughout East Africa, some at great distances from our home.

What would you say are the biggest challenges you deal with in Africa?

Most people think Ebola virus disease, other diseases, crime and wars are rampant here. There hasn’t been a single case of Ebola in East Africa yet. But the biggest risk to our family here is the roads. There’s so much trauma because of traffic accidents and anarchy on the roads.

Read the complete interview with Jon Fielder at theoslertie.jhmi.edu.