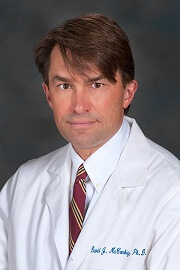 Young scientists interested in bladder cancer research can compete for up to two awards totaling $100,000 from a joint effort between the Johns Hopkins Greenberg Bladder Cancer Institute and the Bladder Cancer Advocacy Network (BCAN).

The deadline to apply for the funds is March 1. The awards are open to scientists in any discipline who have nearly completed their postdoctoral studies or are starting their first faculty position at an academic-based medical center.

“Young scientists use this type of funds to do independent research projects that are out of reach because they lack a large base of research funding,” says David McConkey, Ph.D., director of the Johns Hopkins Greenberg Bladder Cancer Institute, which has distributed $750,000 in additional research grants to scientists at Johns Hopkins and other institutions. “We want to inspire more early-career scientists to join this field.”

Bladder cancer is the fifth most common cancer, affecting more than 70,000 people in the U.S. each year. It strikes men three times as often as women. Research funding has lagged far behind other cancers, such as breast and prostate cancer, McConkey says. Because the disease often recurs, especially in its earliest forms, patients lose enormous quality of life, he says. It’s a costly cancer too, with treatments totaling nearly $4 billion each year.

A review panel of experts organized by BCAN will evaluate each proposal. McConkey says the awards are highly competitive and add recognition to young scientists’ portfolios.

Recent advances include the FDA approval of the immunotherapy drug atezolizumab for bladder cancer patients whose disease worsens after receiving chemotherapy. Scientists have recently charted the genomic characteristics of some rare bladder tumors, in addition to muscle-invasive and nonmuscle-invasive bladder cancers. Such characterization helps create a genomic blueprint of these cancers to help pathologists more easily identify them. The blueprints, says McConkey, also give scientists clues to the behavior of certain tumors, sorting out which ones may be more aggressive and need different therapies.

McConkey says that bladder cancer scientists also are working to identify genetic characteristics of patients who may be cured by chemotherapy alone, potentially avoiding surgery to remove the bladder. He expects that other immunotherapy drugs that work through the same mechanisms as atezolizumab may soon be approved by the FDA to treat bladder cancer, and scientists are looking for genetic or molecular characteristics of patients more likely to respond to them.

BCAN, headquartered in Bethesda, Maryland, has distributed more than $900,000 to young scientists.

Information about the Young Investigator Awards is available at www.bcan.org or by calling BCAN at 301-215-9099.