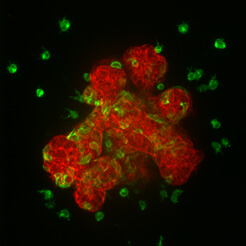 Normal epithelial cells (red) in this fragment of a mouse mammary duct form branched structures. However, cells that turn on the gene Twist1 (green) detach from neighboring cells and migrate into the surrounding environment.
Eliah Shamir

Studying epithelial cells, the cell type that most commonly turns cancerous, Johns Hopkins researchers have identified a protein that causes cells to release from their neighbors and migrate away from healthy mammary, or breast, tissue in mice. They also found that deletion of a cellular “Velcro protein” does not cause the single-celled migration expected. Their results, they say, help clarify the molecular changes required for cancer cells to metastasize.

Because epithelial cells give rise to 85 percent of all cancers, the work may have implications outside of breast cancer. A summary of the results was published online on March 3 in The Journal of Cell Biology.

Epithelial cells line the inside and outside of organs throughout the body. The team focused their work on mammary epithelial cells, which form the ducts that carry milk within the breast. “Tumor cells have to break their connections to other epithelial cells in order to leave the breast and build metastases in other parts of the body,” explains Andrew Ewald, Ph.D., assistant professor of cell biology and oncology at the Johns Hopkins University School of Medicine.

For their study, Ewald’s team removed small pieces of mammary tissue from normal mice and grew them in gels that mimic their natural environment. By using colored proteins to mark different types of cells, they were able to use microscopes to watch how cell behavior varied with the genetics of the cells.

In one experiment, the team deleted the protein from normal mouse mammary cells and watched what happened. Expecting the cells to completely disconnect and move out on their own into the surrounding gel, the researchers were surprised to find that most of the epithelial cells remained connected to each other, although their organization was disrupted. Some of the epithelial cells did penetrate the gel, but usually in single-file “columns” that remained connected to the tissue. A similar result was seen in live mice.

“For tumor cells to metastasize, they have to begin interacting with the proteins outside of the tumor and eventually strike out on their own,” says Eliah Shamir, a graduate student in Ewald’s lab and lead author on the study. “When we deleted E-cadherin, the epithelial cells began interacting more with proteins in the gel, but they didn’t lose contact with the rest of the mammary tissue.”

In a second set of experiments, the team turned on a gene called Twist1, which is thought to affect the activity of many genes needed to transform groups of stationary epithelial cells into independent, mobile cells. The result, they say, was dramatic. (See video below) Within 24 hours of turning on Twist1, dozens of individual cells began to move past the epithelial boundary and into the gel beyond. Again, similar results were seen when the experiment was repeated in live mice.

Surprisingly, the researchers say that when they caused epithelial cells lacking E-cadherin to turn on Twist1, the cells were no longer able to escape into the gel as single cells. Instead, they created many “columns” of cells, which didn’t detach from the mammary tissue. These results suggest that the single-celled detachment and migration induced by Twist1 actually requires the presence of E-cadherin — the Velcro protein that helps bind the cells together. ”This finding is quite counterintuitive,” Ewald says, “and we are eager to understand the biology behind it.”

Since Twist1 is known to affect the activity of many genes, the researchers have begun to narrow down which of those genes is responsible for the cellular spread they witnessed. With that information, they hope to identify new means of preventing metastasis.

“Our goal is to improve outcomes for patients with metastatic breast cancer, and this work takes us one step closer to doing so,” says Ewald.

Other authors of the report include Elisa Pappalardo, Khaled Aziz, Phuoc Tran and Joel Bader of the Johns Hopkins University School of Medicine and Danielle Jorgens, Kester Coutinho, Wen-Ting Tsai and Manfred Auer of the Lawrence Berkeley National Laboratory.

On the Web:
The Journal of Cell Biology article

Related Stories:
Andy Ewald on having the right tools to watch an epithelial tissue remodel its architecture

First Step of Metastasis Halted in Mice with Breast Cancer

The Biological Art of Organ Sculpture