'Unsung' Cells Double the Benefits of a New Osteoporosis Drug 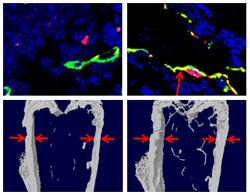 Experiments in mice with a bone disorder similar to that in women after menopause show that a scientifically overlooked group of cells are likely crucial to the process of bone loss caused by the disorder, according to Johns Hopkins researchers. Their discovery, they say, not only raises the research profile of the cells, called preosteoclasts, but also explains the success and activity of an experimental osteoporosis drug with promising results in phase III clinical trials.

A summary of their work was published on Oct. 5 in the journal Nature Medicine.

“We didn’t know that the drug affects preosteoclasts, nor did we understand how important preosteoclasts are in maintaining healthy bones,” says Xu Cao, Ph.D., the Lee H. Riley Jr., M.D., Professor of Orthopaedic Surgery. “Now drug companies hoping to reverse osteoporosis can look for even more drugs that make use of and target these interesting cells.”

The bones of mice, people and all land animals are not only necessary for strength and structure, but also as warehouses for calcium, which cells throughout the body use continuously for everyday tasks like cell-to-cell communication, muscle strength, and even embryo fertilization and hormone balance.

Calcium is taken from digested food and stored in the semihollow space inside bones. To access the stored calcium, the inner bone goes through a process called resorption, in which cells called osteoclasts attach to the bone and dissolve the calcium and other stored minerals. Nearby, specialized blood vessels pick up the calcium and send it throughout the body. They also bring in nutrients needed for new bone formation.

“Most osteoporosis drugs on the market slow down bone resorption but do nothing to encourage bone rebuilding,” says Cao. Previous data, including that from early clinical trials in humans, indicated that the drug odanacatib decreases bone resorption by hobbling CTSK, one of the enzymes used to resorb bone. What came as a pleasant surprise was that the same drug also increased bone rebuilding, but the question was how it did so, Cao says.

To learn more, Cao and his team studied mice genetically engineered to have neither bone-dissolving osteoclasts nor their precursors, preosteoclasts. Though the inner bones of the mice were abnormal, as expected, the team also found that the outside layers of the bones were thin. Moreover, the specialized blood vessels needed to transport bone-building supplies were in scarce supply, suggesting overall that osteoclasts and their precursors regulate bone building and bone resorption.

The team grew the two cell types separately in the laboratory and collected the liquid around them to test for proteins released by the cells. They found that preosteoclasts — but not mature osteoclasts — secrete a protein called PDGF-BB, which is a powerful attracter both of cells that make bone-building cells and those that make the specialized blood vessels. As expected, when the preosteoclasts of mice were prevented from making PDGF-BB, the mice had weak bones.

“Before a new building is constructed, the roads have to be in place so that the materials and equipment can be brought in,” says Cao. “In a similar way, preosteoclasts call blood vessels into an area before bone-building cells begin to make new bone.”

When mice were given L-235, the animal form of odanacatib, the numbers of their preosteoclasts and osteoclasts increased, and they secreted more PDGF-BB. The increased PDGF-BB brought in more cells for making blood vessels and bone, which led to more of the specialized blood vessels and thicker bones.

To see if the drug could help reverse the increased bone resorption and decreased blood vessel formation of postmenopausal osteoporosis, the researchers simulated menopause in female mice by removing their ovaries. At first, the mice had thinner bones and fewer blood vessels, but treatment with the drug increased the concentration of PDGF-BB in the blood, the number of specialized blood vessels both inside and outside of the bones, and the overall thickness and density of the bone.

According to Cao, in addition to slowing bone resorption by blocking CTSK, an osteoclast “weapon,” the drug also appears to slow down the maturation of preosteoclasts, lengthening the amount of time they secrete PDGF-BB before becoming osteoclasts. With increased PDGF-BB, more specialized blood vessels are made and more bone-building cells arrive, restoring the balance between bone resorption and bone rebuilding.

Odanacatib is produced by Merck & Co. Inc. and has already gone through phase III clinical trials with good results, according to Cao. “It is unusual to see a single drug that decreases bone resorption and increases bone rebuilding at the same time,” says Cao. “Beyond that, we now know just how important preosteoclasts and PDGF-BB are to bone building, which is information we can use in designing future studies.”