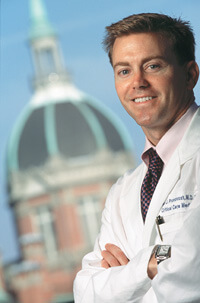 Peter J. Pronovost, M.D., Ph.D., a practicing anesthesiologist and critical care physician at the Johns Hopkins University School of Medicine and an internationally prominent patient safety researcher and advocate has been named one of the world’s “most influential people” of 2008  by Time Magazine.

The magazine’s annual list recognizes people “whose power, talent or moral example is transforming our world.”

Pronovost, who holds the rank of professor in the school’s Departments of Anesthesiology and Critical Care, as well as Surgery, has advanced the use of rigorous scientific research to develop simple tools for greatly improving patient safety and care. He is perhaps best known for one such project conducted in and for intensive care units in the state of Michigan, in which the routine application of a simple checklist of basic precautions for practitioners reduced catheter-related bloodstream infections in patients by up to 66%. His earlier research showed that ICUs staffed with medical intensivists- physicians specially trained in critical care medicine-achieved a 30% reduction in mortality rates.

The checklist has been widely adopted in Michigan, Rhode Island, and New Jersey. Other states may follow suit, while several countries, including Spain, the Netherlands, England, and Ireland, are considering implementing the program. The success of the Michigan ICU safety initiative was the subject of both a New Yorker magazine article in December of last year and a New York Times editorial on January 27, 2008.

The author of more than 200 articles and chapters in the fields of patient safety, ICU care, quality health care, evidence-based medicine, and the measurement and evaluation of safety efforts, Pronovost has seen his “science of safety” enterprise embraced by numerous domestic and European health systems as well as the World Health Organization. He has also testified before Congress to promote patient safety initiatives and the creation of a “culture of safety” in hospitals and among medical practitioners.

A tireless advocate for the development of innovative, field-tested and practical patient safety tools, he is a frequent speaker to hospital staff, health care administrators, policy makers, and patient safety groups. “We become physicians to help alleviate pain and suffering, not to add to it,” says Pronovost. “As doctors and nurses, our first admonishment is to do no harm. But that is not always the case.”

Pronovost’s interest in patient safety stems from his personal experience as a young medical student. During that time, he had to watch his father die, in part due to preventable medical errors.

“Doctors and nurses want to provide the best care,” he says. “But when I watched my dad die because of medical mistakes resulting from a lack of the right tools and training among medical staff, I thought that there has to be a better way, and I’ve spent most of my career seeking to find these better ways.”

“Patient safety is the number one priority for Johns Hopkins Medicine and we have long recognized Peter as a leader in the field,” says Edward D. Miller, M.D., dean/CEO of Johns Hopkins Medicine. “We are delighted-and not surprised-that Time Magazine has recognized his pioneering work. While it’s rare for research to impact practice, and rarer still, for it to impact policy, Peter has a knack for conducting research that does both.”

Pronovost also serves as medical director for Hopkins’ Center for Innovation in Quality Patient Care and has a faculty appointment in health policy at the Johns Hopkins Bloomberg School of Public Health, where he established a World Health Organization-sponsored master’s degree in public health program that focuses on improving clinical performance and patient safety.