The Genome's Traveling Salesmen, Tips on Newsmakers at AAAS 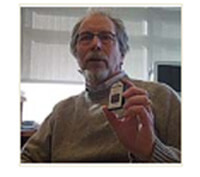 February 14, 2009- Transposons — the traveling salesmen of the genome composed of DNA sequences with no fixed address — are the focus of a symposium at the annual meeting of the AAAS led by experts from the Johns Hopkins

Transposable elements — including retrotransposons that move around with RNA — make up at least one-third, by weight, of the human genome. They are emerging as potentially important predictors of human traits, including those that predispose to diseases, according to Jef Boeke, Ph.D., the professor of molecular biology at Johns Hopkins who coined the term retrotransposon a quarter-century ago.

“Our theory is that because retrotransposon insertions probably knock down gene expression without knocking it out, they might be over-represented in complex traits like susceptibility to cancer or schizophrenia — all the major diseases of humans,” Boeke says, adding: “We think the time is ripe for the study of transposons to make a real contribution to battling those diseases.”

Boeke, the first to show that there is an RNA intermediate in the process by which these chunks of the genome move about, will present his latest findings related to retrotransposons and human diversity.

Her area of expertise involves the molecular mechanisms by which these transposable elements move and how they can be exploited for genome engineering.

Boeke and his team are currently mapping transposons on DNA chips called TIP — short for transposon insertion profiling. TIP chips should allow scientists everywhere to precisely identify the positions of retrotransposons in the genome of different people.

“TIP chips someday will allow us to map your DNA and my DNA and highlight 50 or maybe 500 retrotransposons that are different and might therefore underlie our disease-susceptibility and other differences,” he says.

The AAAS annual meeting's theme, Our Planet and Its Life: Origins and Futures, observes the 200th anniversary of Charles Darwin's birth and the 150th anniversary of the publication of his book, On the Origin of Species by Means of Natural Selection. Nearly 10,000 participants will attend nearly 175 symposia, seminars and workshops as well as plenary and topical lectures by some of the world's leading scientists and engineers.