Finding supports hypothesis that the immunological functions of mucous membranes throughout the body engage in cross talk in response to infection
Release Date: May 13, 2014 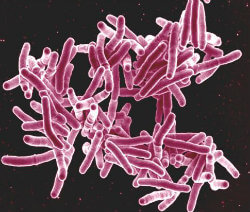 Johns Hopkins researchers have found evidence in mice that a tuberculosis (TB) infection in the lungs triggers immune system signaling to the gut that temporarily decreases the diversity of bacteria in that part of the digestive tract.

The Johns Hopkins researchers showed that this decrease in diversity of gut bacteria as measured in fecal samples happened quickly — within six days after mice were exposed to an aerosol mixture of M. tuberculosis, the TB bacteria. This prompt shift in diversity, they say, suggests that the immune system is attacking the gut bacteria, decreasing the overall diversity by causing certain bacteria to outgrow others in the gut.

The finding was also replicated using a different strain of the TB microbe, according to a report on the work in the May 12 issue of the online journal PLOS One.

Study leader Kathryn Winglee, a Ph.D. student working at the Johns Hopkins Center for Tuberculosis Research, says the finding is important, because it could lead to improved diagnosis of TB, a disease that infects one-third of the world’s population and in 2010 caused 1.4 million deaths.

“The fact that the bacterial populations change in the gut means that we can begin to use this observation for TB diagnosis,” Winglee says. “TB diagnosis is currently challenging, but a simple stool sample test that detects changes in the diversity of gut bacteria after TB infection in the lung might improve diagnosis.”

The finding also adds to growing evidence that the various parts of the immune system found in mucous membranes throughout the body interact as a “global” organ rather than work as separate, individual sites of immune function. Mucous membranes are the moist linings of areas of the body exposed to the environment, such as the nostrils, mouth, lungs, genitals and intestinal tract. These membranes form a protective barrier against infection and contain immune system cells.

Gut microbes have a complex relationship with the immune system, according to Winglee. For example, individuals with arthritis, type 2 diabetes, asthma and certain other diseases have specific changes in the populations of their fecal bacteria compared to healthy people, she explains. “However, there have been very few studies focused on changes in gut bacteria in response to TB infection, especially in individuals whose gut bacterial diversity hasn’t already been artificially affected by antibiotics,” she says.

To study the effect of TB infection on gut bacteria, the researchers infected mice with M. tuberculosis using an aerosol machine that deposited the bacteria into their lungs. The researchers then studied the various populations of bacteria in the gut until the mice died. They compared samples collected after infection with gut bacteria samples taken before infection to identify the changes in populations. The researchers used genetic and statistical techniques to determine the numbers of species present and their abundance. TB infection caused a decrease in diversity of bacteria in the gut of all mice after infection, followed by a recovery in diversity, until death or one week prior to death.

For example, the relative abundance of a different species of bacteria belonging to two families — higher-level groups that contain various species — called Lachnospiraceae and Ruminococcaceae were higher before TB infection; they were also higher in uninfected mice. Other changes in populations of various species of gut bacteria also contributed to a decrease in diversity, as some bacteria become more prevalent while the population of others dwindled.

“Since TB bacteria were usually not found in the guts of the mice we studied, we believe that the changes in overall bacterial diversity are not caused by their presence there,” Winglee says. “Instead, since the span of time when there was a minimum of diversity among bacterial populations that coincided with the most active immune response, we believe that it was the mucosal immune system that caused the shift in diversity.”

Very little is known about the effects of specific gut microorganisms in humans, according to Winglee. So finding that there is a significant loss of diversity of gut bacteria with TB infection is a critical step in understanding some of the events that occur during this disease, as well as the role of the mucosal immune system, she says.

“We often think of each part of the mucosal immune system, such as the lungs and gut, to be separated,” Winglee notes. “However, the fact that an aerosol infection causes such rapid changes in the gut suggests that the various parts of the mucosal system throughout the body actually function in some way like a single organ.”

Other Johns Hopkins researchers involved in the study include Shashank Gupta, Ph.D., Haidan Guo and William Bishai, M.D., Ph.D. Researchers from the University of Maryland School of Medicine also contributed to this research.