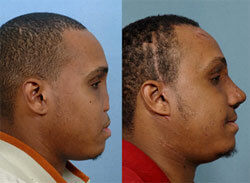 1 2 3 4
Senior Airman Michael Fletcher, before (left) and after his nasal reconstruction

It took only seconds for the Humvee to flip over and crash on a highway near Camp Bucca in southern Iraq in August 2005.  The force of impact was blunted by the body armor protecting Senior Airman Michael Fletcher.  But his gear was not strong enough to stop the wreck from crushing the rest of him.  His left arm was gone, and along with it a sizeable chunk of his midface, including his nose.

Fletcher remembers little of the disfiguring accident that nearly killed him, but he likes to recall shopping in January 2007 near his home on Andrews Air Force Base in Maryland.

Nobody stared at his torn face, he says.  Not anymore, that is, because of his “brand-new nose.”

In a series of six operations over a year-long period that ended with removal of the last sutures on May 2 – and that rank as one of the most complicated nasal reconstructions ever performed at Johns Hopkins – facial plastic and reconstructive surgeons have pieced together more than a dozen bits of bone, cartilage, skin, arteries and veins to rebuild Fletcher’s nose.  All materials were taken from spare or renewable parts of his own body.

Fletcher’s new nose is completely functional.  He can breathe and sneeze through it, and expectations are that he will soon be sensitive to smell and touch, his surgeons say.

Scarring and swelling will naturally reduce for a year, while minor sculpting and contouring procedures are done at an outpatient clinic, but his long days recuperating in the hospital are done, says lead surgeon Patrick J. Byrne, M.D.

Aided by new advances in instrumentation by biomedical engineers, and computer-assisted design of precision plastics for use as templates, Byrne’s team and the patient logged more than 40 hours in surgery, with the first operation, July 18, lasting eight hours.  With his wife, Yolanda, by his side the entire time, Fletcher had more than 60 hospital check-ups and tests and needed three hospital stays, including a 16-hour emergency operation to deal with a wound infection.

“This soldier is fearless,” says Byrne, an assistant professor in otolaryngology – head and neck surgery at The Johns Hopkins University School of Medicine.  “From the beginning, his nasal reconstruction was not straightforward.  He had tremendous scarring all over his face and head injuries so severe that I did not think he would go through it.  But he did not want to wear a prosthesis.  He wanted his nose rebuilt, even if all the world was going to see his scars.

“And there was significant risk that any transferred tissue would not survive.  It could get infected and have to be removed, adding scar tissue and leaving us back where we started,” he says, recalling the courage of his patient.

Hospital records show that Fletcher’s new nose involved more than 40 Hopkins clinical staff.  Among them are an anaplastologist, who helped design the shape and look of the new nose, several anesthesiologists, operating room nurses, schedulers, and home care assistants, as well as a team of surgeons from the United States military who initially treated Fletcher in Kuwait and then at Walter Reed Army Medical Center, in suburban Washington, D.C.

A Walter Reed surgeon who had trained in facial plastic surgery at Hopkins, and who was familiar with Byrne’s recent work with cancer patients, referred Fletcher to Hopkins in January 2006 for the reconstruction.

The plan to rebuild Fletcher’s nose was based on techniques already used to help survivors of nasal cancers resume a normal life without disfigurement.  Though rare, these cancers are often fatal without surgery to remove tumors.  Some cases require total removal of the nose.

Complicating Fletcher’s case was the soldier’s damaged facial skeleton, which had little bone structure to support a new nose, and a sparse network of facial arteries to sustain the highly vascularized nasal tissues.  Arteries supplying blood to the forehead had been slashed in Iraq, potentially compromising the suitability of the skin for subsequent transplant to the nose.  The accident had also fractured Fletcher’s skull, blinded his left eye, and widened the gap between his eyes, something surgeons had to correct to properly place the nose.  Fletcher is also African American, so surgeons were compelled to minimize risk of scarring, as any scar tissue would contrast sharply with his dark skin.

Among the many procedures was the detachment on Dec. 20 of a forehead flap of skin that now makes up the outer skin of the new nose.  The flap was first carved in upside-down profile on the center of his forehead, with the top portion then cut out, turned around clockwise, and laid over the newly rebuilt nose.

The outer skin covering was left attached to the center spot of the forehead, right between Fletcher’s eyes, for six weeks to secure its blood supply during recovery.  While attached, the forehead flap was covered with a protective bandage to prevent infection.  Surgeons had earlier made small incisions across the skin graft to promote new blood vessel formation, and to improve the covering’s arterial network before transplant.

The inside nasal components were assembled in two operations, with nostrils and tip, using skin transplanted from his arm and neck, bone and cartilage came from rib and ear.

One of the more complex procedures involved transfer of soft skin from the underside of Fletcher’s arm to create an inside nasal lining.  Arteries in his neck had to be rerouted to keep sufficient blood flowing to this part of the nose.

Weeks before the first operation, the surgical team fully mapped out Fletcher’s interior and exterior skull, including his nasal passage, by CT scan and nasal endoscopy.

Unique to the Hopkins approach is the additional use of clear plastic molds that are custom-made to help surgeons shape the skin flap, build up supporting cartilage, and construct the nose.  (A mesh made of different plastic is also often used as an alternative support structure in cancer patients.  Sometimes left inside the body, the mesh is resorbed – chemically broken down and disposed of naturally, over time.)

Hopkins anaplastologist Juan Garcia, M.A., a trained medical illustrator who specializes in facial prosthetics, met with Fletcher and, together, using old pictures of the soldier taken before his accident as a reference, they designed his new nose.

Garcia, an assistant professor in art as applied to medicine, at Hopkins, also took a silicone impression of Fletcher’s damaged midface and created a stone model of the damaged terrain on which his new nose would be built.  On to this base, the artist applied hot wax and sculpted a replica of the soldier’s nose, something he has done many times before when making prosthetic noses, ears, and even eyes.  The modeling process took more than two hours and required dozens of minute touch ups.

Once fitted, Fletcher’s wax replica and stone model were each scanned by a computer to create a 3-D image needed to produce the plastic guide.  The methods for using laser scanning and computer software necessary to produce the surgical tool were developed by Byrne and Garcia with a local digital imaging firm, Direct Dimensions of Owings Mills, Md.

After making the computerized version of the surgical guide, the resulting 3-D image was sent to the Berger laboratory at the United States Army’s Aberdeen Proving Ground, in Gunpowder, Md., for fabrication into a plastic version.  The lab specializes in manufacturing precision plastics for the military and private industry, including the kinds of clear plastic molds that Byrne has used to reconstruct noses for a half-dozen cancer patients.

“We know that our part in his recovery is just a single step forward,” says Garcia.  “But we are grateful to have been able to help and wish him well.  He is someone with a tremendous amount of courage.”

Fletchers’s surgery was paid for by his military health insurance plan.  In addition to Byrne and Garcia, facial plastic surgeons involved in Flether’s care were Chris Cote, M.D., and Kofi Boahene, M.D.