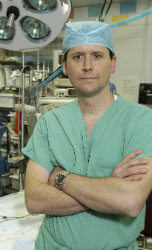 A Johns Hopkins research team reports that major hospitals across the U.S. collectively throw away at least $15 million a year in unused operating room surgical supplies that could be salvaged and used to ease critical shortages, improve surgical care and boost public health in developing countries.

A report on the research, published online Oct. 16 in the World Journal of Surgery, highlights not only an opportunity for U.S. hospitals to help relieve the global burden of surgically treatable diseases, but also a means of reducing the cost and environmental impact of medical waste disposal at home.

The fact of surgical supply waste is nothing new, the researchers note, but say their investigation may be one of the first systematic attempts to measure the national extent of the problem, the potential cost savings and the impact on patients’ lives. While several organizations run donation programs for leftover operating room materials, such efforts would be far more successful if they were made standard protocol across all major surgical centers, the authors say.

“Perfectly good, entirely sterile and, above all, much-needed surgical supplies are routinely discarded in American operating rooms,” says lead investigator Richard Redett, M.D., a pediatric plastic and reconstructive surgeon at the Johns Hopkins Children’s Center. “We hope the results of our study will be a wakeup call for hospitals and surgeons across the country to rectify this wasteful practice by developing systems that collect and ship unused materials to places that desperately need them.”

The staggering waste of surgical supplies, the researchers say, is rooted in the common practice of bundling surgical materials in ways that streamline operating room readiness and efficiency, but once opened, everything in the bundle that is unused is thrown away.

“Such programs are acutely needed not only to help address serious needs in resource poor-settings but also to minimize the significant environmental burden at home institutions,” says study co-author Eric Wan, B.S., a recent graduate of the Johns Hopkins University currently doing post-graduate training at the National Institutes of Health. “This really is a win-win situation.”

The investigators based their estimates on an existing program that recovers and delivers unused surgical supplies from The Johns Hopkins Hospital to two surgical centers in Ecuador. The authors tracked 19 high-demand surgical items donated to the Ecuadorian hospitals over three years, then extrapolated the amount and value of the donations to 232 U.S. surgical centers with caseloads similar to that of The Johns Hopkins Hospital. The results showed that if the 232 American hospitals saved and donated unused surgical supplies, they would generate 2 million pounds of materials worth at least $15 million over a single year. Going a step further, the researchers tracked outcomes among 33 Ecuadorian patients whose surgeries were made possible as a result of the donations. Their analysis showed that donated surgical supplies prevented, on average, eight years of disability per patient.

In the study, materials topping the 19-item surgical supplies list included gauze, disposable syringes, sutures and surgical towels. However, the investigators say, it is important to tailor shipping to the specific needs of each hospital. Matching of donor leftovers to recipient need, they say, will prevent unnecessary shipping costs and avoid creating medical waste locally. In addition, the receiving hospital must have a demonstrated capability and the equipment to clean and sterilize the shipped materials before use in the operating room.

“Saving and shipping these materials is truly a low-hanging fruit enterprise, a simple strategy that could have a dramatic impact on surgical outcomes and public health in resource-poor settings and truly change people’s lives,” says Redett, who has been running the Johns Hopkins donation program since 2003.

The Johns Hopkins initiative, known as Supporting Hospitals Abroad with Resources and Equipment (SHARE), was modeled after a similar program launched at Yale in 1991.