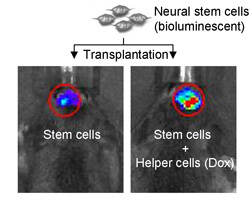 Like volunteers handing out cups of energy drinks to marathon runners, specially engineered “helper cells” transplanted along with stem cells can dole out growth factors to increase the stem cells’ endurance, at least briefly, Johns Hopkins researchers report. Their study, published in the September issue of Experimental Neurology, is believed to be the first to test the helper-cell tactic, which they hope will someday help to overcome a major barrier to successful stem cell transplants.

“One of the bottlenecks with stem cell therapy is the survival of cells once they’re put in the body — about 80 to 90 percent of them often appear to die,” says Jeff Bulte, Ph.D., a professor in the Johns Hopkins University School of Medicine’s Institute for Cell Engineering. “We discovered it helps to put the stem cells in with some buddies that give off growth factors.”

Stem cells can morph to take on any role in the body, making them theoretically useful to treat conditions ranging from type 1 diabetes (replacing insulin-producing cells in the pancreas) to heart disease (taking over for damaged heart cells). The biggest problem for transplanted stem cells, Bulte says, is that they’re initially grown in a dish with ready access to oxygen, then put in the body, where levels are relatively low. “They get a shock,” he says. Other research groups have had some success with acclimating cells to lower oxygen levels before transplantation; another promising strategy has been to provide the stem cells with scaffolds that give them structure and help integrate them with the host.

The research team, spearheaded by postdoctoral fellow Yajie Liang, Ph.D., wondered whether the cells’ survival could also be enhanced with steady doses of a compound called basic fibroblast growth factor (bFGF), an “energy drink” that spurs cells to grow. They engineered cultured human and mouse cells to make greater-than-normal amounts of bFGF under the control of a drug called doxycycline (dox). Making the bFGF gene responsive to dox meant the researchers could control how much bFGF was made, Liang explains.

The team then transplanted the engineered helper cells and stem cells into mice. The stem cells had themselves been engineered to make a luminescent protein, and using a special optical instrument, the researchers could monitor the intensity of the luminescence through the animals’ skin to see how many of the cells were still alive. The team gave the mice steady doses of dox to keep the bFGF flowing.

For the first three days after injection, the stem cells with helpers gave off a noticeably stronger signal than stem cells transplanted alone, Liang says, but a few days later, there was no difference between the two.

Despite the short duration of the helper cells’ effect, Bulte says, the experiment shows the potential of using helper cells in this way. Perhaps the ultimate solution to keeping transplanted stem cells alive will be to use helpers that give off a cocktail of growth factors, he suggests, as well as pre-conditioning for low oxygen conditions and scaffolds. “Once the rubber hits the road, it’s very important that the stem cells survive for a long time,” he says.

Other authors on the paper were Yajie Liang, Louise Ågren, Agatha Lyczek and Piotr Walczak, all of the Johns Hopkins University School of Medicine.

This study was funded by the National Institute of Neurological Disorders and Stroke (grant number 2RO1 NS045062) and the Anders Wall Foundation.

On the Web:
Experimental Neurology study

Related Stories:
Jeff Bulte on tracking cells through their journey through the body

New Technique Developed for Tracking Cells in the Body