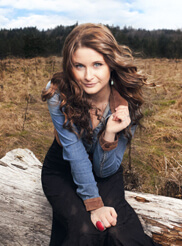 Outen was paired with Oliver this past summer through Music is Medicine’s Donate a Song project. Outen wrote and recorded the song in Oliver’s honor. The song and music video will be sold to raise money for Johns Hopkins pediatric oncology research.

Outen’s rise to fame began in 2007, when she posted videos of herself singing popular songs on YouTube. Since then, her original music has attracted almost 80 million views and 430,000 subscribers on YouTube. Outen’s first single, “Goodbyes”, debuted as #28 on Radio Disney’s Top 30 Countdown and peaked at #5. She has recorded songs for DisneyMania 7 and Walt Disney’s Tinker Bell and the Lost Treasure.