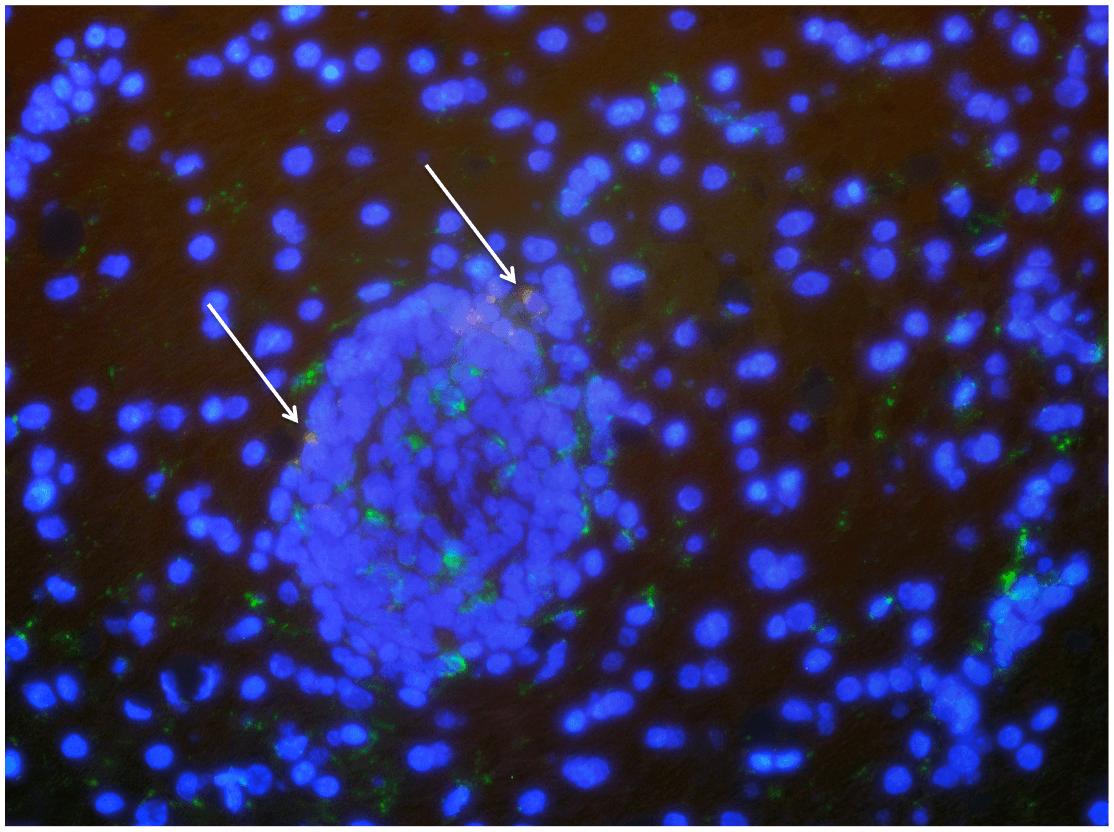 Brain cells from an SIV-infected macaque treated with ingenol and vorinostat. Macrophages are marked in green and the virus in red; virus-infected macrophages appear orange/yellow (arrows). Blue marks the nuclei of all cells.
Stephen Wietgrefe

Combination drug treatments have become successful at long-term control of HIV infection, but the goal of totally wiping out the virus and curing patients has so far been stymied by HIV’s ability to hide out in cells and become dormant for long periods of time. Now a new study on HIV’s close cousin, simian immunodeficiency virus (SIV), in macaques finds that a proposed curative strategy could backfire and make things worse if the virus is in fact lurking in the brain.

One of the proposed curative strategies for HIV, known as “shock and kill,” first uses so-called latency-reversing agents to wake up dormant viruses in the body, making them vulnerable to the patient’s immune system. The idea is that this, in combination with antiretroviral medicines, would wipe out the majority of infected cells.

But based on a study of macaques with SIV, a group of researchers warns in a report published in the January 2 issue of the journal AIDS that such a strategy could cause potentially harmful brain inflammation.

“The potential for the brain to harbor significant HIV reservoirs that could pose a danger if activated hasn’t received much attention in the HIV eradication field,” says Janice Clements, Ph.D., professor of molecular and comparative pathobiology at the Johns Hopkins University School of Medicine. “Our study sounds a major cautionary note about the potential for unintended consequences of the shock-and-kill treatment strategy.”

HIV research efforts have long focused on prevention and developing antiretroviral therapies that keep the virus in check without eradicating it, essentially transforming HIV into a manageable chronic condition, says Lucio Gama, Ph.D., assistant professor of molecular and comparative pathobiology at Johns Hopkins and the lead author of the new study. Then, in 2009, a group in Berlin reported it had cured a man of HIV by giving him a bone marrow transplant from a donor whose genetics conferred natural resistance to the virus. This galvanized federal funding of new research projects aimed at finding a more broadly applicable “AIDS cure,” Gama says. He and Clements are part of that pursuit as members of the Collaboratory of AIDS Researchers for Eradication.

One cure strategy being pursued is to find a medication that would “wake up” virus in the reservoirs, forcing it to reveal itself. But Gama says that could be problematic if HIV reservoirs exist in the brain, and investigators already had some evidence that they do: the many cases of AIDS dementia that developed before the current antiretroviral cocktail treatment was developed. “Research had also shown that HIV can infect monocytes in the blood, which we know cross into the brain,” he says. But no studies had definitively answered whether significant reservoirs of latent HIV in patients under long-term therapy could be sustained in the brain — in part because, in autopsies, it is unclear whether virus detected in the brain comes from brain cells themselves or surrounding blood.

For the new study, Clements, Gama and their collaborators treated three pig-tailed macaque monkeys infected with SIV with antiretrovirals for more than a year. Then the researchers gave two of the macaques ingenol-B, a latency-reversing agents thought to “wake up” the virus. “We didn’t really see any significant effect,” Gama says, “So we coupled ingenol-B with another latency-reversing agent, vorinostat, which is used in some cancer treatments to make cancer cells more vulnerable to the immune system.” The macaques also continued their course of antiretrovirals throughout the experiment.

After a 10-day course of the combined treatment, one of the macaques remained healthy, while the other developed symptoms of encephalitis, or brain inflammation, Gama says, and blood tests revealed an active SIV infection. When the animal’s illness worsened, the researchers humanely killed it and carefully removed the blood from its body so that blood sources of the virus would not muddle their examination of the brain. Testing revealed SIV was still present in the brain, but only in one of the regions analyzed: the occipital cortex, which processes visual information. The affected area was so small that “we almost missed it,” he says.

Gama cautions that the results of their study on macaques with SIV may not apply to humans with HIV. It’s also possible, he says, that the encephalitis was transient and could have resolved by itself. Still, he says, the results signal a need for extra caution in exploring ways to flush out HIV reservoirs and eradicate the virus from the body.