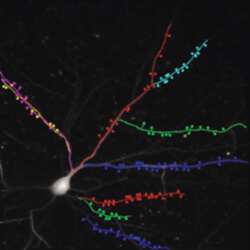 A single nerve cell in the cortex of a live mouse. Individual branches are pseudo-colored to differentiate them. The bumps on the branches are where synapses form. Cell body, white.
Yong Zhang

Researchers at The Johns Hopkins University have succeeded in peering into the brains of live mice with such precision that they were able to see how the position of specific proteins changed as memories were forged. The technique has broad applications for future studies on learning and on what goes wrong in disorders like autism, Alzheimer’s disease and schizophrenia.

A report on the research was published Feb. 2 in the journal Nature Neuroscience.

“As far as we know, no one has ever been able to look at receptor proteins in live animals before,” says Richard Huganir, Ph.D., professor and director of the Department of Neuroscience at the Johns Hopkins University School of Medicine. “This allows us to get a more accurate picture of what’s really happening as the brain processes experiences into memories.”

At the heart of the story are AMPA receptors, which are proteins that live on the outside of nerve cells and receive signals in the form of the molecule glutamate. AMPA receptors play an important role in strengthening and weakening synapses, or the connections between nerve cells that form memories. Up until now, scientists were limited to studying AMPA receptors in nerve cells grown in the laboratory or in tissue samples, but neither of those methods could preserve the complex circuitry, hormones and neurochemicals of a living brain.

To solve that problem, Huganir’s team, led by postdoctoral fellow Yong Zhang, Ph.D., created mice whose AMPA receptors would glow under the light of a special microscope. Because the microscope can focus at a depth of 0.5 millimeters, it can peer into the outer layer of the brain, called the cortex. There, thousands of nerve cells carry information from every part of the body, and each whisker has a whole group of dedicated nerve cells called barrel fields.

The team imaged the mice immediately before and after they tickled a single whisker on each mouse for an hour. What they saw surprised them: Tickling alone was sufficient to increase the number of AMPA receptors in and strengthen the synapses of the barrel fields of the tickled whiskers. Checking back over the next few days, the researchers found that the AMPA receptor levels remained high, suggesting that the whisker-tickling experience had a long-term effect on the mice’s memories.

“The mysteries are the purpose that is served by strengthening these synapses, and whether more AMPA receptors are being made or if they are moving in from somewhere else,” says Zhang. “Future studies will address those questions.”

Huganir says: “This technique opens up many more possibilities, like visualizing learning at the molecular level as it is happening in the intact brain in healthy mice and in mouse models of brain disorders.”

The group first plans to apply the new technique to see what happens as mice learn a complex motor task. With better optics, they also hope to one day be able to go deeper into the brain to areas like the hippocampus, which has a crucial role in memory formation and has been implicated in neurological disorders like autism, Alzheimer’s disease and schizophrenia.

Other authors of the report include Robert Cudmore, Da-Ting Lin and David Linden of the Johns Hopkins University School of Medicine.

This work was supported by grants from the National Institute of Mental Health (P50MH100024 and R01MH051106) and the Howard Hughes Medical Institute.

The photo that accompanies this story and a video are available for download.

We are providing these files with the understanding that they will be used only to help illustrate the story in the corresponding news release. Please use the credit information provided. If there is anything else you need, please email us at JHMedia@jhmi.edu. Thank you.