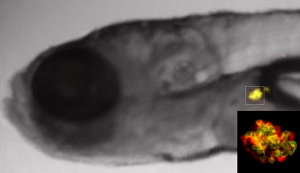 In experiments with 500,000 genetically engineered zebrafish embryos, Johns Hopkins scientists report they have developed a potentially better and more accurate way to screen for useful drugs, and they have used it to identify 24 drug candidates that increase the number of insulin-producing cells in the pancreas.

The novel fish embryo technique, which the researchers say may yield new treatments for diabetes and potentially speed new drug discoveries for other diseases, is described in the Aug. 14 edition of eLife. “More studies need to be done, but we think there’s potentially no limit on the diseases this screening technique could be applied to other than the human imagination,” says Jeffrey Mumm, Ph.D., associate professor of ophthalmology at the Johns Hopkins Wilmer Eye Institute and McKusick-Nathans Institute of Genetic Medicine at the Johns Hopkins University School of Medicine.

Essentially, says Mumm, their method is an adaptation of high throughput screening (HTS), an automated system developed in the 1980s that uses robotic equipment to “dose” cell or tissue samples with candidate drugs in wells of lab dishes known as microtiter plates. The plates act as miniature test tubes and enable specially programmed computers to find chemical compounds that produce a desired effect, such as prompting cells to produce particular proteins or increase in number, positive findings known as hits. Because the microtiter plates contain hundreds of wells and the entire process is automated, tens of thousands of samples can be processed daily, increasing the chances of finding a hit quickly.

Unfortunately, Mumm says, the vast majority of hits discovered in the past using cell-based HTS techniques haven’t proven effective when tested in whole animals because cells and tissues lack the complicated and dynamic biology of whole animals. In an effort to adapt HTS to whole animal screening — and more quickly find drugs more likely to work in humans — a team led by Mumm and Michael Parsons, Ph.D., associate professor of surgery at the Johns Hopkins University School of Medicine, turned to zebrafish embryos. Zebrafish have long been used as model organisms for biological research because they’re transparent, making the effects of experiments easily visible, and because they share most of their genes with humans.

Using standard genetic engineering technology, the researchers bred zebrafish in which pancreatic beta cells that produce insulin glowed yellow, and other pancreatic cells not responsible for producing insulin glowed red. The scientists then placed embryos from the modified fish in microtiter plate wells and tested thousands of compounds from a Johns Hopkins library of drugs, most of which were already approved for human use. Overall, each compound was screened at six different concentrations, which, they report, increased the chances of finding a hit while decreasing the chances of a false negative. Computer programs automatically monitored the effects on the embryos by “looking” for differences in the amount of yellow glow, which signified an increase in beta cell number.

After evaluating more than 500,000 zebrafish embryos, the researchers identified 24 compounds that effectively increased beta cell number in these animals, Mumm says. Besides identifying new drug candidates, the research also identified biological pathways not previously known to have an effect on beta cell production. For example, some of the newly identified drugs appeared to increase beta cell production through a pathway involving serotonin, a chemical better known for transmitting signals in the brain.

The authors suggest that if these newly identified drug candidates have the same effect in other lab models and, eventually, humans, they might someday be used directly to increase beta cell numbers in people who take them or for more effectively growing beta cells in the lab for transplant. In the meantime, they add, this new technique could be used to speed drug discovery for a variety of other medical conditions, from heart disease to neurodegenerative conditions to birth defects.

The research was funded by the National Institute of Diabetes and Digestive and Kidney Diseases under grant numbers 1RC4DK090816 and 17-2012-408; the Maryland Stem Cell Research Fund under a 2013 Postdoctoral Fellowship Program; the Science and Technology Development Fund of Macau SAR under grant numbers FDCT/119/2013/A3, R01 NS073751 and R01DK080730; and the Diabetic Complications Consortium under grant number 12GHSU209.

Relevant disclosures: Luminomics is a company that uses drug discovery techniques applied in the 680 text and could be impacted by the outcome of the study discussed in this news release. Mumm is a founder of Luminomics. Also, Mumm's spouse owns shares of Luminomics’ stock. This arrangement has been reviewed and approved by The Johns Hopkins University in accordance with its conflict of interest policies.