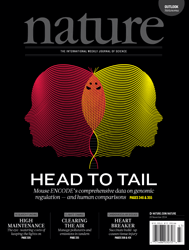 When the mouse and human genomes were catalogued more than 10 years ago, an international team of researchers set out to understand and compare the “mission control centers” found throughout the large stretches of DNA flanking the genes. Their long-awaited report, published Nov. 19 in the journal Nature, suggests why studies in mice cannot always be reproduced in humans. Importantly, the scientists say, their work also sheds light on the function of DNA’s regulatory regions, which are often to blame for common chronic human diseases.

“Most of the differences between mice and humans come from regulation of gene activity, not from genes themselves,” says Michael Beer, Ph.D., assistant professor of biomedical engineering at the Johns Hopkins University School of Medicine, and a member of the international team of investigators. “Because mice are an important model for human biology, we have to understand these differences to better interpret our results.”

Particularly in the early days of genetics, Beer says, researchers tended to ignore regulatory DNA, searching instead for single or multiple gene mutations linked to disease. But genes are only as good as their “mission control centers.” Without them, they cannot produce protein at the right time, in the right place nor in the right amount. “That’s why it is becoming clearer,” he adds, “that most human disorders, from diabetes to attention deficit hyperactivity disorder to Parkinson’s disease, actually stem from off-kilter gene regulation.”

Almost all human genes have a clearly related gene in mice, which makes mice a good model for studying questions in biology that cannot be studied in human beings. But protein coding genes make up only 1.5 percent of either genome, analysis shows, accounting for the fact, for instance, that the history of drug development is littered with compounds that cured rodents but failed in human trials.

The reasons for these failures — and why people don’t have tails or whiskers — likely lies outside of our genes, Beer explains, in the regulatory regions, which compose a larger fraction of the genome, but are less “conserved” — or similar — in mice and men.

To delve into the details of those regions, the team analyzed 124 types of mouse cells and tissues, including brain, heart, blood, kidney, liver and skin. Together, the consortium generated more than 1,000 datasets representing regions of DNA where genes were active, where the DNA was open and accessible, where specific proteins were binding to DNA, and where DNA replication was happening.

To exploit the information in similar datasets previously created using human tissues, Beer developed a mathematical tool to compare all of the datasets and identify the most similar and most rapidly evolving regulatory regions in mice and humans.

The showed that while mouse genes involved in core intracellular processes, like protein production, have activity patterns very similar to those in humans, the activity profiles of mouse genes involved in processes at the surfaces of cells are quite different — a finding with broad implications for researchers using mice to study cell-to-cell communication, immunity, cardiovascular disease and a host of other disorders, Beer notes.

“Evolution has carefully preserved the regulatory sequences for the most fundamental core cell processes, but has left the rest to change as each organism required,” he says.

Beer says this means that, throughout evolution, a lot of genetic changes occurred at the organism or system level, independent of particular tissues. But when the team was able to “hide” those global changes mathematically, the mouse and human gene activity patterns for matching tissues are again alike.

“The mouse has long been a mainstay of biological research models,” says National Human Genome Research Institute Director Eric Green, M.D., Ph.D. “These results provide a wealth of information about how the mouse genome works, and a foundation on which scientists can build to further understand both mouse and human biology.”

The mouse dataset used in the summary report in Nature has been online since 2012 and is regularly updated with more information.

Michael Beer has no competing interests to disclose.