Findings in animals could spark therapies to halt the decline of aging hearts
Release Date: June 17, 2015 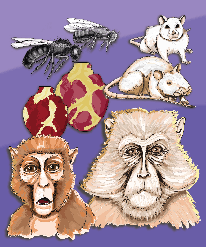 The human heart makes precious few new cells but manages to generate billions of life-sustaining beats as it grows old.

Now research conducted in fruit flies, rats and monkeys by scientists at Johns Hopkins, UC San Diego, and other institutions reveals that levels of a protein called vinculin increase with age to alter the shape and performance of cardiac muscle cells — a healthy adaptive change that helps sustain heart muscle vitality over many decades.

“The heart is an amazingly resilient organ but one that generally doesn’t regenerate, and its ability to pump invariably declines with age,” says Anthony Cammarato, Ph.D., co-principal investigator on the study and an assistant professor of medicine and physiology at the Johns Hopkins University School of Medicine.

“Our findings reveal that vinculin fuels beneficial structural and physiologic changes in aging heart cells, and it can be an important therapeutic target to slow down the heart muscle’s inevitable demise,” Cammarato adds.

The new findings about the role of vinculin, the researchers say, could pave the way to treatments that extend the lives of patients afflicted by heart failure, largely a disease of aging marked by heart enlargement and weak pumping. It is estimated to affect more than 8 million people in the United States alone over the next decade.

Results of the federally funded research, published June 17 in Science Translational Medicine, show rising vinculin levels in the aging hearts of multiple species. The protein’s presence in organisms of various physiologic complexity, the investigators say, is a sure sign of its conservation among species and its evolutionary importance.

Researchers hunting for clues into the mystifying ability of hearts to keep on pumping in the absence of robust cell regeneration focused on vinculin — already known for its role in maintaining the cell’s backbone, or cytoskeleton — because of evidence that heart tissue obtained from patients with ailing or aging hearts showed high levels of it.

“We wanted to know if vinculin was a rogue player or more of an innocent bystander in the development of heart disease and age-related heart failure,” Cammarato says. “Turns out, vinculin is a good guy, the body’s way of slowing down the decline of one of its most vital organs as it grows old.”

In an initial set of experiments, researchers analyzed levels of vinculin in the heart muscle of adult and aging fruit flies, rats and monkeys. In all three, vinculin levels rose steadily with age.

Next, researchers analyzed biopsies from rat hearts. Compared with cardiac cells obtained from younger rats, tissue from old animals showed notable clustering of vinculin in the cell junctions — the bridges that connect one cell to the next — a pattern the team also observed in fruit flies. That pattern, the scientists believe, allows vinculin to boost transmission of mechanical force from cell to cell and enhance overall heart contraction.

To figure out exactly how vinculin helps maintain heart function into old age, scientists focused on fruit flies because of the insects’ well-known genetics, rapid aging and short lives, which facilitated  the  study of  vinculin-driven changes over the span of a lifetime more quickly and efficiently. They compared several strains of flies, including a strain with normally functioning vinculin genes and one naturally deficient in vinculin.

Examining cardiac muscle cells under a microscope, the researchers noticed marked differences between the groups. The cardiac cells of flies with normal vinculin accumulation got smaller with age and showed the characteristic vinculin clustering around the periphery of the cell and along the intercellular bridges. When researchers induced genes in vinculin-deficient flies to crank out more of the protein, their heart cells quickly shrank in size and developed the same distinctive vinculin clustering around the border seen in cells obtained from their cousins with normal vinculin genes.

To gauge whether these cell changes led to difference in cardiac function, the investigators performed something akin to a human heart stress test. They immersed the insects’ isolated beating hearts into a thick solution, forcing them to work harder than they normally would. The hearts of flies with normal vinculin tolerated exertion much better than the hearts of vinculin-deficient flies. So did the hearts of the once vinculin-deficient flies that the researchers had genetically altered to produce more of the protein.

In a final step, the investigators studied the interior of heart cells. What they noticed, Cammarato says, suggested how and why vinculin caused changes in cardiac performance. Cells encircled by vinculin had a markedly well-organized interior, their contraction-fueling muscle proteins in a near-perfect arrangement. By contrast, muscle proteins inside heart cells from vinculin-deficient flies had a decidedly more disordered pattern of arrangement.

“What we saw was an exquisite visual proof of the principle that form dictates function,” Cammarato says. “Encircling the cell like a rubber band, vinculin appears to keep its interior impeccably arranged and in doing so ensures that form and performance remain intact.”
Most strikingly, however, flies whose genes were induced to precision-boost vinculin production only in the heart, sparing other organs, survived, on average, 150 percent longer than their vinculin-deficient counterparts.

Cammarato says scientists have known for some time that as the heart ages, subtle molecular shifts can affect cell growth, behavior and the function of key proteins. All of these changes, over time, alter the heart’s ability to pump and contract. Past research has focused on the mechanisms that erode heart function. In contrast, the present study aimed to pinpoint how changes in protein function actually preserve cardiac strength.

“Vinculin appears to be at the heart of a natural defense mechanism that reinforces the aging heart cell and helps it better sense and respond to age-related changes,” says study senior author Adam Engler, Ph.D., an associate professor of bioengineering at UC-San Diego and resident scientist at the Sanford Consortium for Regenerative Medicine.

“Capitalizing on the body’s own protective mechanisms and hijacking them therapeutically could help halt the decline of organs that don’t regenerate,” Cammarato says.

Jennifer Van Eyk, Ph.D., of Johns Hopkins was a co-investigator on the study.