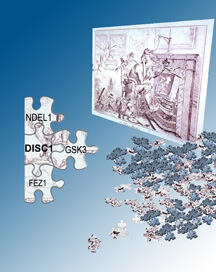 1 2
DISC1 is a risk gene for major mental disorders and has been considered as an edge piece for psychiatric genetics. Different DISC1 interactors are involved in regulating different phases of neurogenesis. The background puzzle piece is a painting by George Cruikshank depicting a man suffering from mental disorders.
Art illustration by Mingxi Max Song.

Causes for psychiatric diseases like schizophrenia and autism have been difficult to pinpoint, since they may be triggered by many small genetic changes that alone may be insufficient, but in the right combination may cause disease.

Drastic DNA rearrangements in the genetic letters of the DISC1 gene are known to cause schizophrenia and other major mental disorders, however, these large changes are rare and do not apply to the majority of people with schizophrenia. Nevertheless, DISC1 is thought to be an entry point for study into the cause of the disease, and defects in DISC1 combined with defects in other genes may contribute to disease.

“We studied the function of two proteins known to interact, FEZ1 and DISC1, in cells and animal models, which suggested that these proteins work together in adult brain development” says Guo-li Ming, M.D., Ph.D., professor of neurology and neuroscience and member of  the Johns Hopkins Institute for Cell Engineering. “When we looked at the human genetic sequences of DISC1 and FEZ1, we found that a combination of small DNA changes raises risk for schizophrenia.”

To determine if FEZ1 and DISC1 work together in adult brain development, the researchers used molecular biology techniques to reduce the amount of FEZ1 in the newborn neurons in mouse adult hippocampus, then examined the cells under a microscope. The neurons with less FEZ1 looked similar to cells with less DISC1; they were larger and had longer feelers that are used to reach out and communicate with other neurons nearby. The researchers proposed that these proteins may be working together in neurons to control cell size and feeler length, and when this process is disrupted, it may lead to psychiatric diseases.

“By continuing to examine interactions of key genes involved with disease in cells and correlating the results with patient databases, we can begin to unravel the genetic contributions of psychiatric disorders that previously were a mystery to us,” says Hongjun Song, Ph.D., professor of neurology and director of the Stem Cell Program at the Institute for Cell Engineering. “Finding sets of proteins, like FEZ1 and DISC1, that synergistically work together to cause disease will also give us new drug targets to develop new therapies.”

Related Stories:
Guo-li Ming on How Neurons Make Connections in the Brain