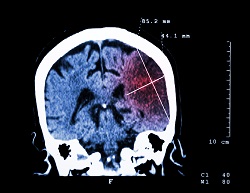 A robotic arm and a virtual game were essential tools in a new study from researchers at Johns Hopkins Medicine. The study results suggest that while training doesn’t change neurological repair in chronic stroke patients, it can indeed help such patients learn new motor skills and achieve more independence in their daily lives.

A report on the work is published in the journal Neurorehabilitation and Neural Repair on Oct. 27.

“What we found is that physical rehab is not going to change the weakness caused by damaged brain cells in chronic patients, but it is going to change how well they can perform certain tasks, which can have a huge impact on a patient’s daily life,” says Pablo Celnik, M.D., director of the Department of Physical Medicine and Rehabilitation at Johns Hopkins.

Brain damage from strokes occurs when the blood supply to the brain is blocked (ischemic stroke) or a blood vessel feeding brain tissue ruptures (hemorrhagic stroke). Depending on the extent of the stroke, the damage can cause partial or total paralysis, affecting motor function, balance, speech, sensation and other physical activities. Chronic stroke patients are those whose physical impairments persist more than six months after the stroke. Rehabilitation specialists measure the damage using the Fugl-Meyer Assessment (FMA), which measures the neurological damage wrought by a stroke on a scale from zero to 66.

All of the study participants were trained to control a simple video game using a robotic piece of equipment that held their dominant arm at 90 degrees from their bodies. This eliminated gravity as a burden for those whose arms were weakened by their strokes. The subjects were then taught to use the muscles around their elbow to move a cursor across a screen into small target windows.

Participants’ performance in the game was measured during training sessions and skill assessment trials. A pre-training skill assessment was conducted to get a baseline from which to measure improvement. Participants were asked to move the cursor through the windows in time with a metronome and completed nine blocks of 10 trials at various speeds — 24, 30, 38, 45, 60, 80, 100, 110 and 120 beats per minute. The metronome prevented participants from slowing down to improve their accuracy, so the only way to show improvement was by becoming more skilled at the task.

The next phase of the experiment had participants attend 30-minute training sessions for four consecutive days. They were asked to complete five blocks of 30 trials, all at their own pace, and were encouraged to improve their speed and accuracy in each consecutive block. Following the training sessions, participants’ skill levels were tested again in another skill assessment.

Results showed that while each group’s skill level improved by the end of the training, those with greater motor impairment still demonstrated less skill in both the pre- and post-training assessments. All participants reached a plateau in their improvement around experimental days three and four.

However, the study showed that there was considerable overlap between the post-training performance of the stroke patients and the pre-training performance of groups with less impairment. “When you look at the data, the post-training mild-to-moderate group is indistinguishable from the pre-training control group. And the same was true for post-training scores of those in the moderate-to-severe group and the mild-to-moderate group,” says Robert Hardwick, Ph.D., postdoctoral fellow in the Department of Neurology at the Johns Hopkins University School of Medicine.

According to the World Health Organization, 15 million people worldwide suffer a stroke each year. An estimated 5 million die, and another 5 million are left with lasting motor impairment. Celnik cautions that this study only included chronic stroke patients and that their future research plans include conducting similar studies in acute stroke patients — those within three months of the stroke — which could yield different results. “Maybe there is a different impact of training in the earlier stages of stroke damage,” says Celnik.

This study was funded by a Eunice Kennedy Shriver National Institute of Child Health and Human Development research project grant.

The video that accompanies this news release is available for download.