Comparison of fat cells in mice and men hints at how genes and environment conspire to produce disease
Release Date: January 6, 2015 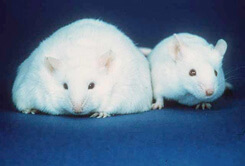 An analysis of the genomes and epigenomes of lean and obese mice and humans has turned up a wealth of clues about how genes and the environment conspire to trigger diabetes, Johns Hopkins researchers say. Their findings reveal that obesity-induced changes to the epigenome — reversible chemical “tags” on DNA — are surprisingly similar in mice and humans, and might provide a new route to prevention and treatment of the disease, which affects hundreds of millions worldwide. A report on the study appears Jan. 6 in the journal Cell Metabolism.

“It’s well known that most common diseases like diabetes result from a combination of genetic and environmental risk factors. What we haven’t been able to do is figure out how, exactly, the two are connected,” says Andrew Feinberg, M.D., M.P.H., Gilman Scholar and director of the Center for Epigenetics in the Institute for Basic Biomedical Sciences at the Johns Hopkins University School of Medicine. “This study takes a step in that direction.”

Feinberg has long studied the epigenome, which he compares to “software” that runs on DNA’s “hardware.” Epigenetic chemical tags affect whether and how much genes are used without changing the genetic code itself.

Feinberg wondered whether epigenetics might partly explain the skyrocketing worldwide incidence of type 2 diabetes. Obesity is a well-established risk factor for the disease, so Feinberg’s research group teamed with that of a group led by G. William Wong, Ph.D., an associate professor of physiology in the Center for Metabolism and Obesity Research at Johns Hopkins, to study the epigenetics of otherwise identical mice that were fed either normal or high-calorie diets.

Analyzing epigenetic marks at more than 7 million sites in the DNA of the mice’s fat cells, the researchers found clear differences between the normal and obese mice. Some sites that bore chemical tags called methyl groups in the lean mice were missing them in the obese mice, and vice versa. The methyl groups prevent genes from making proteins.

With colleagues at Sweden’s Karolinska Institutet, Feinberg and his team then tested whether the same pattern of differences held in fat cells from lean and obese people, and found, to their surprise, that it did. “Mice and humans are separated by 50 million years of evolution, so it’s interesting that obesity causes similar epigenetic changes to similar genes in both species,” Feinberg says. “It’s likely that when food supplies are highly variable, these epigenetic changes help our bodies adapt to temporary surges in calories. But if the high-calorie diet continues over the long term, the same epigenetic pattern raises the risk for disease.”

The research team also found that some of the epigenetic changes associated with obesity affect genes already known to raise diabetes risk. Others affect genes that had not been conclusively linked to the disease, but that turned out to have roles in how the body breaks down and uses nutrients, a process called metabolism. “This study yielded a list of genes that previously have not been shown to play a role in diabetes,” says Wong. “In further tests, we showed that at least some of these genes indeed regulate insulin action on sugar uptake; they offer insights into new potential targets for treating type 2 diabetes.”

In addition to providing leads for drug development, the results also suggest that an epigenetic test could be developed to identify people much earlier on the path to diabetes, giving more hope for preventing the disease, Feinberg says.