Research On Cilia Heats Up: Implications For Hearing, Vision Loss And Kidney Disease - 05/13/2013

Research On Cilia Heats Up: Implications For Hearing, Vision Loss And Kidney Disease 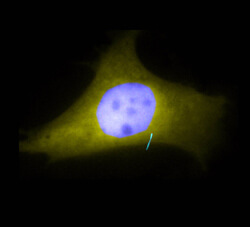 1 2
A cilium stands out in green fluorescence against the yellow fluorescence of the rest of the cell. The nucleus is in blue.

Experiments at Johns Hopkins have unearthed clues about which protein signaling molecules are allowed into hollow, hair-like “antennae,” called cilia, that alert cells to critical changes in their environments.

Researchers found that the size limit for entry is much greater than previously thought, allowing most of a cell's proteins into cilia. The researchers believe that the specific collection of proteins in each cilium, customized to the needs of each cell type, is determined by whether and how cilia keep proteins inside once they enter –– not which ones they allow in initially.

“According to our experiments, 90 percent of the proteins in mammalian cells should be able to fit inside cilia based on their size," says Takanari Inoue, Ph.D., assistant professor of cell biology and member of the Center for Cell Dynamics at the Johns Hopkins University School of Medicine. “But most of them have never been found [inside the cilia], so we think that most proteins do wander in at some point, but only certain ones remain inside.”

So-called “primary cilia” have been attracting intense attention as recent research has confirmed their role in monitoring the cell's exterior environment and conveying information to the rest of the cell using an arsenal of signals stored inside the thin interior of each antenna-like cilium. The results of this study, which help explain how that arsenal is developed, will be published online in the journal Nature Chemical Biology on May 12.

Primary cilia are found protruding from most cells in a wide variety of organisms, and defects in cilia have been implicated in everything from polycystic kidney disease to vision and hearing loss. In the kidney, they monitor the flow of urine; in the eye, they sense the wavelength of light; in cartilage, they sense pressure; and in the heart, blood flow. No matter where they are, Inoue says, their job is to translate such mechanical forces—or, in some cases, chemical ones—into molecular signals for the cell, so that it can respond appropriately to its environment.

The signaling molecules inside cilia are tailored to the required responses. For example, some are proteins that bind to DNA to modify gene activity, letting a cell respond to environmental cues by producing more of a particular protein.

The only way into the cilial column is through a hole at its base. “A cilium forms like a short drinking straw being pushed outwards from inside an inflated balloon,” says Inoue. “What we don’t know is whether there is some sort of cap over the hole, regulating what goes in and out. We found that more signaling molecules can enter the straw than we thought.”

“Primary cilia are really difficult to study,” Inoue says, “because they are so small and narrow, with each cilium just 1/10,000th the volume of the rest of the cell.”

Previous research in other laboratories suggests that a fixed pore exists at the base of a cilium that only allows relatively small molecules inside. By developing more sensitive experimental methods, the Inoue group was able to show that molecules almost 10 times larger than those known before could enter.

Specifically, they first engineered an anchor-like molecule that selectively embedded itself in the membranes of cilia. On the inside end of the anchor was half of a “molecular snapper.” Inside the watery interior of the cell, the team placed fluorescent molecules of known size, fitted with the other half of the molecular snapper. If these fluorescent molecules entered cilia, they would carry their fluorescence with them and be trapped inside when the snappers clicked together, allowing the researchers to easily take images of them.

By repeating this experiment many times with molecules of increasing size, the Inoue team was able to show that every molecular size they tested was able to enter the cilia. The only difference between the molecules of different sizes was their rate of entry: Smaller molecules entered more quickly than larger ones.

Figuring out how cilia select their captives is a question for another study, Inoue says.

Takanari Inoue on the leading edge of migrating cells