‘Random’ Cell Movement Is Directed From Within 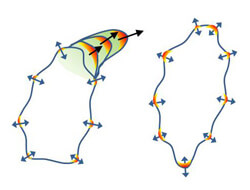 Caption: Diagram of a hand-like projection (left) versus the rhythmic “ruffling” of the cell membrane (right) that occur with and without the activation of the messenger protein network.
Credit: Devreotes lab

Cell biologists at The Johns Hopkins University have teased apart two integral components of the machinery that causes cells to move. Their discovery shows that cellular projections, which act as hands to help a cell "crawl," are apparently always initiated by a network of message-relaying proteins inside the cell. It was already known that in directional movement, the network is activated by sensor proteins on the cell's surface in response to external cues. They now know that in random movement, the messenger network is also causative: It can self-activate spontaneously.

Because cellular movement is necessary for everything from embryo development to wound healing to cancer metastasis, the work is expected to have wide-ranging implications for understanding and manipulating these biological processes, the researchers say. In fact, they note that defects in the messenger protein network have been linked to many types of cancer. The findings are summarized in a paper published online Oct. 20 in the journal Nature Cell Biology.

“It was previously thought that messenger proteins were only involved in directional movement: that without them, cells could only move randomly, through the spontaneous formation of these hand-like projections,” says Peter Devreotes, Ph.D., professor and director of the Department of Cell Biology at the Johns Hopkins University School of Medicine. “Now we know that even random movement requires the activation of the messenger protein network.”

According to Devreotes, a key component of a cell’s machinery is a crisscrossing network of protein chains that wrap around the inside edge of the cell, giving it shape and structure and inspiring the name “cytoskeleton.” To allow movement, this network must build itself up in a given area of the cell, pushing the cell’s membrane outward and creating a hand-like projection that can “grip” the external environment and pull the cell forward.

In their experiments, the Devreotes team sought to understand the relationship between each of these components. They began, he says, by bathing their cells in a drug that paralyzes the cytoskeleton. Not surprisingly, the cells wouldn’t move, but the spontaneous responses of the messenger network still occurred.

Devreotes explains, “You can think of the cell as a row boat with several crewmen and a coxswain, sitting in the rear, steering the rudder and shouting at the crew to keep their movements in sync. If the oars are taken away (i.e., a paralyzed cytoskeleton), the coxswain can yell at the crew as much as he wants but the boat won’t move.”

Using a combination of genetic and imaging techniques, the team then incapacitated the other components of the system one by one and watched what happened. Inhibiting the messenger proteins (the coxswain) showed that the cytoskeleton has an intrinsic rhythm that “ruffles” the cell membrane every 10 seconds, but there were no projections created, so the cells didn’t move. “It’s as if the crew can still row without the coxswain but each person is rowing in a different direction so the boat just stays where it is,” says Chuan-Hsiang Huang, a co-author of the study.

The team expected that when they removed the sensor proteins they would see no movement, based on the old idea that both random and directional cell movement required signaling from these proteins. However, they found instead that the messenger network is “excitable.” That is, without the sensor proteins or external cues, the messenger proteins can still work on their own, telling the cytoskeleton to create projections here or there, moving the cells about randomly. “This situation could be compared to a boat without a rudder. The coxswain is there to coordinate the rowing of the crew so the boat does move, but not in any specific direction,” explained co-author Ming Tang.

Devreotes says the most exciting implications of this research are those relevant to cancer metastasis. “Several of the messenger proteins that we studied are found in higher quantities during cancer progression, and it is likely that the resulting changes in cell movement are involved in the advancement of the disease,” he says. “We now know that we have to create drugs that target the messenger proteins (not just the sensor proteins) in order to entirely immobilize tumor cells.”

The other authors of the report are Changji Shi and Pablo Iglesias of The Johns Hopkins University.

This work was supported by grants from the National Institute of General Medical Sciences (GM28007, GM34933, GM71920) and the Damon Runyon Cancer Research Foundation.

The hunt for the cell's compass