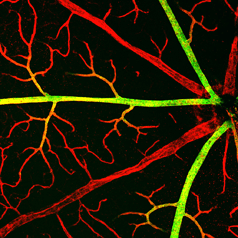 Blood vessels near the center of a healthy mouse retina. Arteries in green; veins in red.
Yanshu Wang

Working with mice, Johns Hopkins researchers have shed light on the activity of a protein pair found in cells that form the walls of blood vessels in the brain and retina, experiments that could lead to therapeutic control of the blood-brain barrier and of blood vessel growth in the eye.

Their work reveals a dual role for the protein pair, called Norrin/Frizzled-4, in managing the blood vessel network that serves the brain and retina. The first job of the protein pair’s signaling is to form the network’s proper 3-D architecture in the retina during fetal development. The second job, after birth, is to continue signaling to maintain the blood-brain barrier, which gives the brain an extra layer of protection against infection transmitted through the circulatory system.

The Hopkins researchers say results of the study, published online in Cell on Dec. 7, could have treatment implications for disorders of the retinal blood vessels caused by diabetes, and age-related loss of central vision. They also could help clinicians develop a way to temporarily increase the penetrability of the blood-brain barrier, allowing critical drugs to pass through to the brain, says Jeremy Nathans, M.D., Ph.D., a Howard Hughes researcher and professor of molecular biology and genetics at the Institute for Basic Biomedical Sciences at the Johns Hopkins School of Medicine.

Scientists already knew that Frizzled-4 is a protein located on the surface of the cells that create blood vessel walls throughout the body. Genetic mutations that cause Frizzled-4’s absence in mice and humans create severe defects in blood vessel development, but only in the retina, the light-absorbing sheet of cells at the back of the eye. Retinal tissue consumes the most oxygen per gram than any other tissue in the body. Therefore, three networked layers of blood vessels are required to fulfill its oxygen needs. So blood vessel defects in the retina generally starve it of oxygen, causing blindness.

In an effort to understand how Frizzled-4 and its activator Norrin work normally, Nathans’ team deleted Norrin in mice. As a result, the rodents’ retinal arteries and veins became confused and crisscrossed. Alternatively, if they turned Norrin on earlier than usual, the networks began to develop earlier. And in mice missing either Norrin or Frizzled-4, retinal blood vessels grew radially, but they grew slowly and failed to create the second and third networked layers. All of these results suggest that Norrin and Frizzled-4 play an important role in the proper timing and arrangement of the retinal blood vessel network, Nathans says.

The team also found that mice missing just Frizzled-4, besides having major structural defects in their retinal blood vessels, showed signs of a leaky blood-brain barrier and, similarly, a leaky blood-retina barrier. To get at the cause of this, the team used special genetic tricks to control the activity of Frizzled-4 in a time- and cell-specific manner, creating mice that were missing Frizzled-4 in only about one out of every 20 endothelial cells. What they found is that only the cells missing Frizzled-4 were leaky and, surprisingly, the general architecture of the networks was fine.

Nathans explains that, normally, these blood vessel endothelial cells contain permeable “windows” and relatively loose “bolts” connecting the cells together. When in the brain and retina, they have no “windows” and their “bolts” connect them tightly. Nathans adds, “We now know that endothelial cells that make up the blood-brain barrier have to receive signals constantly from nearby brain or retinal cells telling them, ‘You’re in the brain. Tighten your bolts and close your windows.’”

The “windows” in the other endothelial cells in the body are protein portals that allow large molecules to pass through easily — to be filtered by the kidneys, for example. The central nervous system, including the retina, is a privileged area. If toxins were to pass through an endothelial “window” into the brain, the resulting damage could be detrimental to the brain’s activity. So the body seals off these areas from bloodborne pathogens by tightening the “bolts” between and closing the “windows” of the endothelial cells that form the blood vessels servicing those areas. This reinforcement of the endothelial cells is what is known as the blood-brain barrier.

Although crucial to protecting the central nervous system, the blood-brain barrier also prevents drugs in the bloodstream from getting inside the brain to treat diseases, such as cancer. “Our research shows that blood vessel cells lacking Frizzled-4 are leaky. With this information in hand, we hope that someday it may be possible to temporarily loosen the blood-brain barrier, allowing life-saving drugs to pass through,” says Nathans.

Other authors on the paper are Yanshu Wang, Amir Rattner, Yulian Zhou, John Williams and Philip Smallwood, all from the Johns Hopkins University School of Medicine.

This work was supported by grants from the National Eye Institute (R01EY018637), the Howard Hughes Medical Institute, the Johns Hopkins Brain Science Institute, the Foundation Fighting Blindness, and the Ellison Medical Foundation.

Sight Gone, But Not Necessarily Lost

On the Web:
Link to article