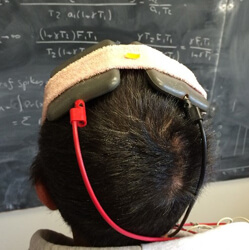 People with Parkinson’s disease (PD) tend to slow down and decrease the intensity of their movements even though many retain the ability to move more quickly and forcefully. Now, in proof-of-concept experiments with “joysticks” that measure force, a team of Johns Hopkins scientists report evidence that the slowdown likely arises from the brain’s “cost/benefit analysis,” which gets skewed by the loss of dopamine in people with PD.

In addition, their study with a small group of 20 patients with PD demonstrated that stimulation of the cortex of the brain using external electrodes corrected some of the distortion and temporarily improved some patients’ motor symptoms. PD affects up to 1 million Americans.

“The loss of dopamine associated with Parkinson’s disease makes the effort required to move the affected side of the body seem greater, so the brain is less willing to use that arm to complete tasks,” says Reza Shadmehr, Ph.D., professor of biomedical engineering at the Johns Hopkins University School of Medicine. “Our study suggests that direct current stimulation can compensate somewhat for the loss of dopamine by decreasing the effort the brain has to put into getting its motor neurons to fire,” adds Shadmehr, the senior author of a report on the research published online in The Journal of Neuroscience on Sept. 2.

According to the researchers, their experiments stemmed from the knowledge that dopamine, the chemical released throughout the cortex of the brain by specialized neurons, is known to make animals more likely to exert effort to achieve a reward. In Parkinson’s, dopamine neurons generally die on one side of the brain, affecting the ability of the patient to exert effort with the opposite side of the body. In urgent situations as simple as preventing a ball from falling off a table, for example, people with PD can often still make rapid, intense movements with their affected arm, but it seems as though the brain’s “cost assessment” for making everyday movements is abnormally high.

To test this hypothesis, Shadmehr and his team first designed an experiment to measure how much force a patient’s brain was willing to “assign” to each arm. In their first experiment, participants, all right-handed, included 15 healthy volunteers and 15 with PD, ages 50 to 75, who had had Parkinson’s for two to 20 years and were receiving medication to control their symptoms, such as tremors, muscle rigidity and lack of balance. With their arms held in mobile supports above a table, participants were asked to grip the handles at the ends of the supports, which could measure the force applied to them. Participants then had to apply about 4 pounds of muscle force to the handles to move an electronic cursor on a computer screen to a target. They could use any combination of both arms to achieve the task. This was repeated 10 times in 16 different directions representing a full circle.

When performing this task, healthy participants shared the effort between both arms: They split the 4 pounds of force between their two arms fairly equally and never applied more than 30 percent more force with one arm than with the other. By contrast, on average, patients with PD showed a twofold greater preference for their less affected arm, sometimes skewing their effort by as much as 70 percent toward the less affected arm.

Shadmehr’s team says the difference was not due to a lack of strength in the affected arm of the patients with PD, because the team also tested each arm's ability to apply force in every direction and found that the patients’ strength was comparable to that of healthy individuals.

Guessing that the reduced ability to control force in patients with PD was related to decreased dopamine — which makes it harder to “recruit” neurons for a particular task — the researchers devised a brain stimulation experiment to further test their hypothesis.

“The greater the number of neurons firing together to complete a task, the less they each have to fire and the more controlled the resulting action is,” says Shadmehr. “In Parkinson’s, the loss of dopamine might mean that neurons that control movement don’t fire as easily, which means that a few neurons have to do the whole job and can’t perform as well, generating noisier output. The brain seems to know this and avoids assigning effort in those directions where it has less control.”

To overcome this problem, the team used transcranial direct current stimulation (tDCS) on a total of 25 patients, 10 for each of three tests, with some participating in more than one test. They reasoned that by increasing the electrical current within the neurons using mild stimulation through electrodes placed on the scalp, the cells would be closer to their firing threshold and would be easier for the brain to engage.

In another experiment involving 10 patients, where neither the patients nor the clinicians evaluating them knew what kind of stimulation they received, the investigators found that one form of stimulation, known as cathodal tDCS, worked best and that the patients who got such stimulation were more willing to engage their affected arm than those who received no stimulation, or anodal stimulation. The researchers also saw a related decrease in the variability associated with these patients’ movements. Importantly, they observed that the stimulation produced an average improvement of 25 percent in the motor symptoms of the patients, as quantified via the motor component of the Unified Parkinson’s Disease Rating Scale (UPDRS), particularly improving rigidity on the affected side.

Finally, the researchers tested the effectiveness of tDCS in 10 patients over a 10-day period. On the first three days, participants received no stimulation or fake stimulation; on days four through eight, they received cathodal stimulation; and on days nine and 10, no stimulation. Each day, they were given the arm movement test and the UPDRS. The results showed that improvement was real but temporary, in that it only occurred on those days on which cathodal tDCS was given.

“As far as we know so far,” Shadmehr cautions, “the effects of tDCS are very temporary, but that’s not surprising since no new dopamine cells are being created, which is the root of the problem.” Nevertheless, he says, “tDCS is a relatively simple, painless and inexpensive intervention that could be developed for home use, a device we are working on. It’s possible,” he adds, “that the brain would get used to the stimulation — just as it adjusts to medications — and also become less responsive over time,  but we are hopeful that continued stimulation might improve symptoms.”

Other authors of the report include Yousef Salimpour and Zoltan Mari of the Johns Hopkins University School of Medicine.

This work was supported by grants from that National Institute of Neurological Disorders and Stroke (NS078311) and the Human Frontiers Science Program.