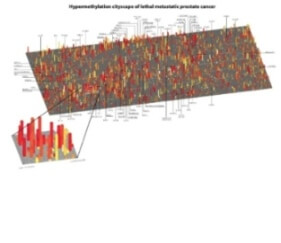 In a genome-wide analysis of 13 metastatic prostate cancers, scientists at the Johns Hopkins Kimmel Cancer Center found consistent epigenetic “signatures” across all metastatic tumors in each patient. The discovery of the stable, epigenetic “marks” that sit on the nuclear DNA of cancer cells and alter gene expression, defies a prevailing belief that the marks vary so much within each individual’s widespread cancers that they have little or no value as targets for therapy or as biomarkers for treatment response and predicting disease severity.

A report of the discovery, published in the Jan. 23 issue of Science Translational Medicine, describes a genomic analysis of 13 men who died of metastatic prostate cancer and whose tissue samples were collected after a rapid autopsy.

Samples from three to six metastatic sites in each of the patients and one to three samples of their normal tissue were analyzed to determine the amount of molecular marks made up of methyl groups that attach to sites along the genome in a process known as DNA methylation. The process is part of an expanding target of scientific study called epigenetics, known to help drive cell processes by regulating when and how genes are activated. Mistakes in epigenetic processes also are known to trigger or fuel cancers.

“Knowing both the genetic and epigenetic changes that happen in lethal prostate cancers can eventually help us identify the most aggressive cancers earlier and develop new therapies that target those changes,” says Srinivasan Yegnasubramanian, M.D., Ph.D., assistant professor of oncology at The Johns Hopkins University School of Medicine. “But there has been an open question of whether epigenetic changes are consistently maintained across all metastatic sites of an individual’s cancer.”

“As they evolve and grow, cancer cells acquire and maintain changes that enable them to continue thriving,” says Yegnasubramanian. “We know that cancer cells maintain and pass along genetic changes in the nucleus of cells across metastatic sites, and our research now shows that epigenetic changes also are maintained to nearly the same degree.”

The scientists say that the consistent methylation changes they found appear to represent so-called driver changes critical to the cancer’s development and could be targets for treatment. By contrast, other methylation changes found only sporadically in the metastatic sites are more likely what are called passenger changes that occur by chance and are less promising as treatment targets or biomarkers than driver changes.

“Our study shows that for prostate cancer, at least, each person develops his own path to cancer and metastasis, and we can find a signature of that path in the epigenetic marks within their tumors,” says Yegnasubramanian, who envisions that certain epigenetic changes can be grouped into clusters to be used as biomarkers signaling a lethal cancer.

Yegnasubramanian and his team also plan to study how each of the driver changes work and how they influence cancer metastasis.