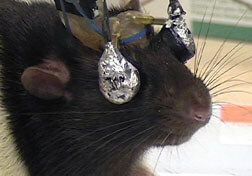 A rat wears special goggles to receive visual cues to one eye or the other.
Marshall Hussain Shuler

In experiments on rats outfitted with tiny goggles, scientists say they have learned that the brain’s initial vision processing center not only relays visual stimuli, but also can “learn” time intervals and create specifically timed expectations of future rewards. The research, by a team at the Johns Hopkins University School of Medicine and the Massachusetts Institute of Technology, sheds new light on learning and memory-making, the investigators say, and could help explain why people with Alzheimer’s disease have trouble remembering recent events.

Results of the study, in the journal Neuron, suggest that connections within nerve cell networks in the vision-processing center can be strengthened by the neurochemical acetylcholine (ACh), which the brain is thought to secrete after a reward is received. Only nerve cell networks recently stimulated by a flash of light delivered through the goggles are affected by ACh, which in turn allows those nerve networks to associate the visual cue with the reward. Because brain structures are highly conserved in mammals, the findings likely have parallels in humans, they say.

“We’ve discovered that nerve cells in this part of the brain, the primary visual cortex, seem to be able to develop molecular memories, helping us understand how animals learn to predict rewarding outcomes,” says Marshall Hussain Shuler, Ph.D., assistant professor of neuroscience at the Institute for Basic Biomedical Sciences at the Johns Hopkins University School of Medicine.

To maximize survival, an animal’s brain has to remember what cues precede a positive or negative event, allowing the animal to alter its behavior to increase rewards and decrease mishaps. In the Hopkins-MIT study, the researchers sought clarity about how the brain links visual information to more complex information about time and reward.

The presiding theory, Hussain Shuler says, assumed that this connection was made in areas devoted to “high-level” processing, like the frontal cortex, which is known to be important for learning and memory. The primary visual cortex seemed to simply receive information from the eyes and “re-piece” the visual world together before presenting it to decision-making parts of the brain.

To monitor the vision-reward connection process, the team fitted rats with special goggles that let researchers flash a light before either their left or right eye. Thirsty rats with goggles were given access to a water spout inside a testing chamber. When they approached the water spout, a brief visual cue was presented to one eye.

If light was sent to the left eye, the water spout would have to be licked a few times before water came to the rat; if light was sent to the right eye, the rat would have to lick many more times before water came. After a few daily sessions of such “conditioning” (not unlike Pavlov’s famous dog-bell-reward experiments), the rats learned how long they would have to lick before getting a water reward. If they didn’t get the reward in the expected amount of time, they would give up and leave the spout.

Monitoring the pattern of electrical signals given off by individual nerve cells in the rat brains, the researchers found that the signals’ “spikes” weren’t just reflecting the visual cue alone. Rather, the signals seemed to relay the time of expected reward delivery through altered spiking patterns. They also saw that many nerve cells seemed to report one or the other visual cue-reward interval, but not both. In cells stimulated by a flash to the left eye, the electrical signal returned to its baseline after a short delay, in sync with the timing of the water reward; a cue to the right eye correlated with a longer delay, also in sync with the reward. According to the researchers, the amount of time that passed before nerve cells returned to their resting state was the brain’s way of setting up a “timed expectation.”

The researchers next used those same rats to ask if ACh is necessary for nerve cells to learn new time delays. To do that, they switched the visual cues so that a flash in the left eye meant a long delay and one in the right eye meant a short one. Vision-processing nerve cells in the rats in which ACh delivery was left intact adapted their signals to the new associations; but those in the rats that no longer received ACh continued to relay the old associations, suggesting that ACh is necessary to make new associations but not to express old ones.

Hussain Shuler explains, “When a reward is received, ACh is sent throughout the brain and reinforces only those nerve cell connections that were recently active. The process of conditioning continues to strengthen these nerve connections, giving rise to a timed expectation of reward in the brain.”

According to Hussain Shuler, studies have shown that Alzheimer’s patients have low levels of ACh and have trouble forming new memories. Though medication may elevate ACh, alleviation of symptoms is limited. “Our research explains that limitation,” he says. “Therapeutically, we predict that the problem isn’t just low levels of ACh — the timing of ACh delivery is key.”

Other authors of the report include Emma Roach of the Johns Hopkins University School of Medicine and Alexander Chubykin and Mark Bear of the Massachusetts Institute of Technology.

Related Stories:
The Hippocampus’ Remembrance of Things Past