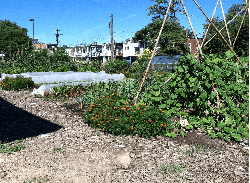 Buying fresh fruits and vegetables can be hard for families living in low-income urban neighborhoods, many of which are known as “food deserts” for their lack of full-service grocery stores that stock healthy food.

A report on the findings, which compared outcomes of efforts in the Belair-Edison and Reservoir Hill neighborhoods, was published in Public Health Nutrition in February.

“Because of time and transportation issues, many low-income families rely on corner neighborhood stores to purchase food, so having healthy fruits and vegetables available there gives them options to make dietary changes they need to stay healthy,” says Kimberly Gudzune, M.D., M.P.H., an assistant professor of medicine at the Johns Hopkins University School of Medicine. “And if physicians know about such stores, they are more likely and better able to counsel patients to start making those changes,” she adds.

For the case study, Gudzune selected two urban farmers and two neighborhood stores to work together. Farmers delivered fruits and vegetables weekly to corner stores. For nine weeks, the stores displayed and sold seasonal fruits, root vegetables and squash at farm stand prices. For the first five weeks, the study covered all produce costs to reduce the financial risk for farmers and store owners. From weeks six to nine, the researchers decreased the financial support, and the store owners paid the rest.

Results showed that the corner store in Reservoir Hill, which sold 86 percent of all produce delivered, stocked eight times more fresh produce than it did before the intervention. The store in Belair-Edison sold 63 percent of all the items delivered and did not significantly increase produce variety.

The difference in the two stores’ experience, the researchers say, highlight critical factors that can enhance or defeat efforts to address food deserts. For example, the Reservoir Hill store had no nearby competitors, and the local neighborhood and business associations supported the initiative by promoting it at meetings and newsletters. The store in Belair-Edison, by contrast, faced competition from a nearby supermarket and other stores, and served mainly commuters and students on a main street who might have been reluctant to carry produce on a bus ride or walk home.

Besides the importance of refrigeration and attractive display, community engagement emerged as a significant factor in success, the researchers say. “It takes an entire community to generate enough business to support this program,” Gudzune explains. “If the community is not interested, then the program will not survive.”

Because people usually think of corner stores as places to buy soda and chips, the intervention included promoting fresh produce by prominently labeling the fruits and vegetables, providing recipe cards, and hosting tasting events. “People were used to the conventional grocery store produce, but when they tried fresh tomatoes in season, they couldn’t believe how good they tasted. It’s a whole new experience,” Gudzune says.

Urban farms grow crops in vacant lots and parks, and they distribute and sell the products in local neighborhoods. Their locations, however, often put them out of reach of residents without cars or with limited hours to shop.

In the collaborative model suggested by the researchers, the urban farmers not only delivered the food, but also actively assisted the store owners with proper storage and display. “I think it’s an interesting model and fits our mission really well, despite the challenges in keeping the produce fresh,” says Alison Workman, manager of Whitelock Community Farm, which participated in the study. “As a community farm, we focus on being part of our neighborhood greening and making fresh food accessible.”

The research team plans to extend its study to more farms and stores.

The study was funded by the Eunice Kennedy Shriver National Institute of Child Health and Human Development and the National Institutes of Health’s Office of Behavioral and Social Sciences Research (grant number U54HD070725). This initiative also received the grand prize in the 2012 Urbanite magazine Healthy Food Challenge.

A video is available to accompany this story.

We are providing this material with the understanding that it will be used only to help illustrate the story in the corresponding news release. Please use the caption and credit information provided. If there is anything else you need, please email us at JHMedia@jhmi.edu. Thank you.