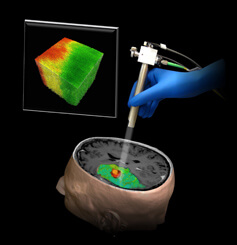 Brain surgery is famously difficult for good reason: When removing a tumor, for example, neurosurgeons walk a tightrope as they try to take out as much of the cancer as possible while keeping crucial brain tissue intact — and visually distinguishing the two is often impossible. Now Johns Hopkins researchers report they have developed an imaging technology that could provide surgeons with a color-coded map of a patient’s brain showing which areas are and are not cancer.
A summary of the research appears June 17 in Science Translational Medicine.
“As a neurosurgeon, I’m in agony when I’m taking out a tumor. If I take out too little, the cancer could come back; too much, and the patient can be permanently disabled,” says Alfredo Quinones-Hinojosa, M.D., a professor of neurosurgery, neuroscience and oncology at the Johns Hopkins University School of Medicine and the clinical leader of the research team. “We think optical coherence tomography has strong potential for helping surgeons know exactly where to cut.”
First developed in the early 1990s for imaging the retina, optical coherence tomography (OCT) operates on the same echolocation principle used by bats and ultrasound scanners, but it uses light rather than sound waves, yielding a higher-resolution image than does ultrasound. One unique feature of OCT is that, unlike X-ray, CT scans or PET scans, it delivers no ionizing radiation to patients.
For the past decade, research groups around the globe, including a group at Johns Hopkins led by Xingde Li, Ph.D., a professor of biomedical engineering, has been working to further develop and apply the technology to other organs beyond the relatively transparent eye. Carmen Kut, an M.D./Ph.D. student working in Li’s lab, thought OCT might provide a solution to the problem of separating brain cancers from other tissue during surgery.
Working with Li, Quinones-Hinojosa and other collaborators, Kut first built on the idea that cancers tend to be relatively dense, which affects how they scatter and reflect lightwaves. The team tried for three years to build their technique on this principle. Eventually, the researchers figured out that a second special property of brain cancer cells — that they lack the so-called myelin sheaths that coat healthy brain cells — had a greater effect on the OCT readings than did density.
Once they had found the characteristic OCT “signature” of brain cancer, the team devised a computer algorithm to process OCT data and, nearly instantaneously, generate a color-coded map with cancer in red and healthy tissue in green. “We envision that the OCT would be aimed at the area being operated on, and the surgeon could look at a screen to get a continuously updated picture of where the cancer is — and isn’t,” Li says.
So far, says Kut, the team has tested the system on fresh human brain tissue removed during surgeries and in surgeries to remove brain tumors from mice. The researchers hope to begin clinical trials in patients this summer.
If those trials are successful and the system goes to market, it will be a big step up from imaging technologies now available during surgeries, says Quinones-Hinojosa. “Ultrasound has a much lower resolution than OCT, and MRI scanners designed to be wheeled over a patient on the operating table cost several millions of dollars each — and require an extra hour of operating room time to obtain a single image,” he says. By comparison, the team anticipates that the cost of an OCT-based system would run in the hundreds of thousands of dollars.
The system can potentially be adapted to detect cancers in other parts of the body, Kut says. She is working on combining OCT with a different imaging technique that would detect blood vessels to help surgeons avoid cutting them.
Other authors on the paper are Kaisorn L. Chaichana, Jiefeng Xi, Shaan M. Raza, Xiaobu Ye, Elliot R. McVeigh and Fausto J. Rodriguez, all of The Johns Hopkins University.
The study was funded by the National Institute of Biomedical Imaging and Bioengineering (grant number R01EB007636), the National Institute of Neurological Disorders and Stroke (grant number R01NS070024), the National Cancer Institute (grant numbers R01CA120480 and F30CA183430) and the Coulter Foundation. The authors have filed a PCT international patent application (PCT/US15/22432) entitled “Quantitative Tissue Property Mapping for Real-Time Tumor Detection and Interventional Guidance.”

We are providing this photo/video with the understanding that it will be used only to help illustrate the story in the corresponding news release. Please also find appropriate credit information in the caption of the image or in the YouTube video description. If there is anything else you need, please email us at JHMedia@jhmi.edu. Thank you.