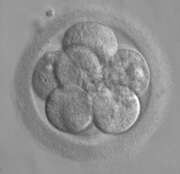 Researchers at the Johns Hopkins University School of Medicine have devised a new technique, which helps couples that are affected by or are carriers of genetic diseases have in vitro fertilized babies free of both the disease in question and other chromosomal abnormalities. The results were reported in the April issue of Fertility and Sterility.

Because embryos are so small and cells contain too little DNA to do extensive testing, researchers have in the past had to limit genetic testing of IVF embryos to either looking for a specific gene mutation that is known to exist in either parent or for other types of chromosomal abnormalities such as the existence of too many or too few chromosomes (aneuploidy) or other structural chromosomal aberrations. By a method of trial and error that lasted approximately one year, Paul Brezina, M.D., M.B.A., a clinical fellow in obstetrics and gynecology and William G. Kearns, Ph.D., associate professor of obstetrics and gynecology optimized a technique they call “modified multiple displacement amplification” that allows them to amplify or make carbon copies of the DNA they obtain from an embryo obtained by in vitro fertilization, enough to do multiple tests.

“We were able to amplify the genomic DNA accurately to the point where both single-gene testing and aneuploidy screening could be done. Up till now it has only been one or the other,” says Brezina.

Couples often first learn that they are carriers of a genetic disease, such as Cystic Fibrosis or Tay-Sachs, from having a previous child who is affected by the disease. Planning to have another baby, who may also be at risk for having the same disease, can be quite a daunting experience, says Brezina.

As a result, such couples have been turning to in vitro fertilization (IVF) coupled with preimplantation genetic diagnosis (PGD), genetic testing prior to implanting the embryos into the mother’s uterus, to become pregnant. In PGD, which is also called single-gene testing, doctors remove either one cell from an IVF-conceived three-day old embryo, which contains only eight cells total, or a few cells from a five-day old embryo, which contains about 150 cells total. Removing more cells from the embryo is also an unviable option as it can compromise its health and development. They then test the DNA from these cells for the disease-causing genetic alteration. They then implant back into the mother only those embryos that will give rise to a baby free of the disease.

However, as much of a boon as PGD is, babies conceived in this manner are still exposed to other genetic risks, says Brezina, the most common being the gain or loss of chromosomes, a condition called aneuploidy. Aneuploidy can cause several diseases, the most commonly known of which is Down syndrome.

Brezina and Kearns applied their new modified multiple displacement technique to screen embryos from a couple where both parents were carriers for GM1 gangliosidosis, a potentially lethal disease that can cause seizures, bone malformations and mental disabilities; the couple already had one child with the disease and the mother was older and had a prior history of miscarriage. Brezina and Kearns amplified the DNA from the couple’s embryos and sent some of the amplified DNA to their collaborators at the Reproductive Genetics Institute in Chicago for PGD testing for GM1 gangliosidosis. They had enough DNA leftover to test it for aneuploidy using a test called 23-chromosome microarray on embryos, a test developed by Kearns.

Of the ten IVF embryos that they tested, they found that although only two were affected by GM1 gangliosidosis, an additional three were also aneuploid, leaving them with only five healthy embryos available for transfer into the uterus. One of the healthy embryos was transferred back into the mother, who subsequently became pregnant. “The strength of this technique lies not only in its ability to detect two different kinds of genetic alterations while causing minimal harm to the embryo, but also in the speed with which it can be completed,” says Kearns. “This allows the embryo to be transferred back into the mother in a timely manner.”

Since the online publication of this study in December 2010, Kearns, who also directs the Shady Grove Center for Preimplantation Genetics in Rockville, MD, has offered combined PGD and aneuploidy testing to seven more couples. Five of these seven couples have achieved pregnancy with this technique and one couple is scheduled to transfer an embryo in the near future. Speaking of one of the couples, he says, “I am really happy for this couple. She is a 39-year-old woman who is a carrier for Fragile X syndrome (a genetic disease that causes mental disabilities) and had two first trimester miscarriages. We did the same methodology on her and now she is pregnant. It is spectacular.”

And they aren’t stopping there. Kearns and Brezina are trying to further improve existing technologies so that they can more accurately identify genetic abnormalities in IVF embryos. “IVF is only going to become more relevant as time goes on and as it gets better and better,” says Brezina. He adds “The ability to know detailed information about the embryos you are putting back in, it is a powerful thing.”

No external sources of funding were used in this research.

Authors on the paper are Paul Brezina and William Kearns of Johns Hopkins; Andrew Benner of the Shady Grove Center of Preimplanation Genetics of Rockville, Md.; and Svetlana Rechitsky, AnverKuliev, Ekaterina Pomerantseva and Dana Pauling of Reproductive Genetics Institute of Chicago, Ill.

On the web:
Johns Hopkins Gynecology and Obstetrics