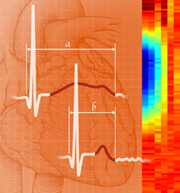 Johns Hopkins researchers have discovered a new drug that may be useful in treating a heart rhythm condition called long QT syndrome. The study was published online on June 28 in the Early Edition of the Proceedings of the National Academy of Sciences.

“It’s exciting, and we’re lucky that the compound does what we hoped it would do,” says Min Li, Ph.D., professor of neuroscience at the Johns Hopkins School of Medicine.

Long QT syndrome, which results from genetic mutation or certain medications, can cause the heart to beat chaotically and the affected person to die suddenly. The chaotic heartbeat is due to abnormal electrical activity in the heart. In an electrocardiogram test, this abnormality appears as a wider-than-normal QT interval, a pattern of “hills” in a map of peaks and valleys corresponding to the heart contracting and relaxing.

The culprit for the abnormal electrical activity is dysfunction of either of two types of channels on the surface of heart muscle cells. These channels normally allow potassium ions, which carry a positive electrical charge, to leave the cell, but in the case of long QT syndrome, they don’t allow enough ions to leave before closing. Li and his team wanted to find a drug that would specifically coax one of these channels — the hERG channel — to stay open for a normal length of time, a little longer than 300 milliseconds.

Finding a drug that alters the channel’s activity wasn’t hard, he claims. “The hERG channel is like a magnet. A lot of compounds bind to it and block it.” But finding one that keeps it open long enough took significant effort.

At any given time, the hERG channel can either be open, closed or inactivated. Before the researchers could search for a drug, they needed to find out whether, in long QT syndrome, the hERG channel toggles too quickly from open to closed or from open to inactivated. To figure this out, they turned to an existing mathematical model that describes the electrical activity of heart muscle cells.

Next, they took the model one step further by changing certain parameters in their equations, such as the voltage across a heart muscle cell, which helps determine whether the hERG channel is open. The model predicted that changing the voltage at which the channel toggles from open to inactivated would make the wide curve — and the related long QT interval — from long QT syndrome patients look like the normal curve and normal QT interval from healthy individuals. Li and his team realized that in order to attempt to make the long QT not so long, they needed to find a drug that would produce this voltage change.

Using a state-of-the-art automated electrophysiology instrument, they had previously screened large compound libraries and found small-molecule drugs that alter hERG channel activity, including several that activate the channel. They selected a potent small-molecule drug that had first been characterized in that study and, based on its biophysical properties, would likely produce the desired voltage change. The researchers then tested whether the drug actually produced the desired voltage change in cultured rodent cells engineered to contain many copies of the hERG channel. They found that, as predicted by the model, the drug changed the voltage at which the channel toggles from open to inactivated. It had no effect on other channels they tested that typically are found in heart muscle cells.

The researchers then wanted to see if the drug had the same effect in human heart muscle cells containing a mutated gene that leads to fewer copies of the hERG channel. These cells are difficult to culture in a petri dish, so the researchers started with stem cells derived from the skin cells of a person with long QT syndrome. By adding specific hormones to these cells, they induced them to become heart muscle cells that contract rhythmically.

“They have an incredibly synchronized behavior. It’s like a wave in a stadium,” says Li.

Using these cells, Li and his team performed an experiment similar to the previous one and found that the drug changed the voltage at which the channel toggles from open to inactivated. Moreover, it decreased the width of the hill-shaped curves, suggesting that it may be useful in treating long QT syndrome.

The next step, which Li’s collaborators have started, is to test the drug’s safety and efficacy in animals. If the drug is found to be safe and effective, it may eventually be tested in humans.

“The results so far are pretty encouraging,” says Li.

The research team includes graduate students, postdoctoral fellows and faculty members from the Departments of Neuroscience and Cardiology and the Institute for Basic Biomedical Sciences at Johns Hopkins School of Medicine, and researchers from the Technical University of Munich and the Chinese Academy of Sciences. The study was funded by the National Institute of General Medical Sciences (GM078579), the National Institute of Mental Health (MH084691), the Maryland Stem Cell Research Fund, the European Research Council, and the German Research Foundation.