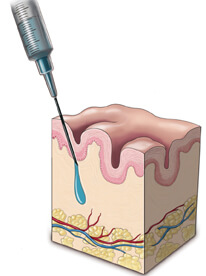 Biomedical engineers at Johns Hopkins have developed a new liquid material that in early experiments in rats and humans shows promise in restoring damaged soft tissue relatively safely and durably. The material, a composite of biological and synthetic molecules, is injected under the skin, then “set” using light to form a more solid structure, like using cold to set gelatin in a mold. The researchers say the product one day could be used to reconstruct soldiers' faces marred by blast injuries.

The Johns Hopkins researchers caution that the material, described in a report in the July 27 issue of Science Translational Medicine, is “promising,” but not yet ready for widespread clinical use.

“Implanted biological materials can mimic the texture of soft tissue, but are usually broken down by the body too fast, while synthetic materials tend to be more permanent but can be rejected by the immune system and typically don’t meld well with surrounding natural tissue,” says Jennifer Elisseeff, Ph.D., Jules Stein Professor of Ophthalmology and director of the Translational Tissue Engineering Center at the Johns Hopkins University School of Medicine. “Our composite material has the best of both worlds, with the biological component enhancing compatibility with the body and the synthetic component contributing to durability.”

The researchers created their composite material from hyaluronic acid (HA), a natural component in skin of young people that confers elasticity, and polyethylene glycol (PEG), a synthetic molecule used successfully as surgical glue in operations and known not to cause severe immune reactions.

The PEG can be “cross-linked”­or made to form sturdy chemical bonds between many individual molecules­using energy from light, which traps the HA molecules with it. Such cross-linking makes the implant hold its shape and not ooze away from the injection site, Elisseeff says.

To develop the best PEG-HA composite with the highest long-term stability, the researchers injected different concentrations of PEG and HA under the skin and into the back muscle of rats, shone a green LED light on them  to “gel” the material, and used magnetic resonance imaging (MRI) to monitor the persistence of the implant over time. The implants were examined at 47 and 110 days with MRIs and removed. Direct measurements and MRIs of the implants showed that the ones created from HA and the highest tested concentration of PEG with HA stayed put and were the same size over time compared to injections of only HA, which shrank over time.

The researchers evaluated the safety and persistence of the PEG-HA implants with a 12-week experiment in three volunteers already undergoing abdominoplasty, or “tummy tucks.” Technicians injected about five drops of PEG-HA or HA alone under the belly skin. None of the participants experienced hospitalization, disability or death directly related to the implant, which was about 8 mm long­or about as wide as a pinky fingernail. However, the participants said they sensed heat and pain during the gel setting process. Twelve-weeks after implantation, MRI revealed no loss of implant size in patients. Removal of the implants and inspection of the surrounding tissue revealed mild to moderate inflammation due to the presence of certain types of white blood cells. The researchers said the same inflammatory response was seen in rats, although the types of white blood cells responding to implant differed between the rodents and humans, a difference the researchers attribute to the back muscles­ the target tissue in the rats­being different than human belly fat.

“We still have to evaluate the persistence and safety of our material in other types of human tissues, like muscle or less fatty regions under the skin of the face, so we can optimize it for specific procedures,” says Elisseeff.

Elisseeff said the team has especially high hopes for the composite’s use in people with facial deformities, who endure social and psychological trauma. When rebuilding soft tissue, recreating natural shape often requires multiple surgeries and can result in scarring. “Many of the skin fillers available on the market consisting of HA-like materials used for face lifts are only temporarily effective, and are limited in their ability to resculpt entire areas of the face. Our hope is to develop a more effective product for people, like our war veterans, who need extensive facial reconstruction. ”

The research was supported by a grant from Kythera Biopharmaceuticals, which develops cosmetic pharmaceutical products.