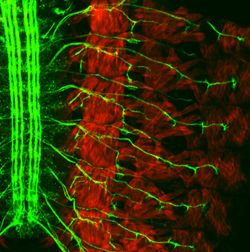 As fruit flies develop, motor neurons (green) extend from either side of their spinal-cord-like structures (left) to connect to muscle fibers (red), branching as they go.
Zhuhao Wu

Working with fruit flies, Johns Hopkins scientists have decoded the activity of protein signals that let certain nerve cells know when and where to branch so that they reach and connect to their correct muscle targets. The proteins’ mammalian counterparts are known to have signaling roles in immunity, nervous system and heart development, and tumor progression, suggesting broad implications for human disease research. A report of the research was published online Nov. 21 in the journal Neuron.

To control muscle movements, fruit flies, like other animals, have a set of nerve cells called motor neurons that connect muscle fibers to the nerve cord, a structure similar to the spinal cord, which in turn connects to the brain. During embryonic development, the nerve cells send wire-like projections, or axons, from the nerve cord structure out to their targets. Initially, multiple axons travel together in a convoy, but as they move forward, some axons must exit the “highway” at specific points to reach particular targets.

In their experiments, the researchers learned that axons travelling together have proteins on their surfaces that act like two-way radios, allowing the axons to communicate with each other and coordinate their travel patterns, thus ensuring that every muscle fiber gets connected to a nerve cell. “When axons fail to branch, or when they branch too early and too often, fruits flies, and presumably other animals, can be left without crucial muscle-nerve connections,” says Alex Kolodkin, Ph.D., a Howard Hughes investigator and professor of neuroscience at the Institute for Basic Biomedical Sciences at the Johns Hopkins University School of Medicine.

At the center of the communications system, Kolodkin says, is a protein called Sema-1a, already known to reside on the surface of motor neuron axons. If a neighboring axon has a different protein, called PlexA, on its surface, it will be repulsed by Sema-1a and will turn away from the axon bundle. So Sema-1a acts as an instructional signal and PlexA as its receptor. In the fruit fly study, the scientists discovered that Sema-1a can also act as a receptor for PlexA. “We used to think that this pair of surface proteins acted as a one-way radio, with information flowing in a single direction,” says Kolodkin. “What we found is that instructional information flows both ways.”

The Johns Hopkins team identified the “two-way” system by knocking out and otherwise manipulating fruit fly genes and then watching what happened to motor neuron branching. In these experiments, the researchers uncovered still other proteins located within the motor axons that Sema-1a interacts with after receiving a PlexA signal. When the gene for a protein called Pebble was deleted, for example, motor axons bunched together and didn’t branch. When the gene for RhoGAPp190 was deleted, motor axons branched too soon and failed to recognize their target muscles.

Through a series of biochemical tests, Kolodkin’s team found that Pebble and RhoGAPp190 both act on a third protein, Rho1. When Rho1 is activated, it collapses the supporting structures within an axon, making it “limp” and unable to continue toward a target. Sema-1a can bind to Pebble or to RhoGAPp190, and subsequently, these proteins can bind to Rho1. Binding to Pebble activates Rho1, causing axons to branch away from each other. However, binding to RhoGAPp190 shuts down Rho1, causing axons to remain bunched together. Thus, says Kolodkin, balance in the amounts of available Pebble and RhoGAPp190 can determine axon behavior, although what determines this balance is still unknown.

“This signaling is complex and we still don’t understand how it’s all controlled, but we’re one step closer now,” says Kolodkin. He notes that “a relative” of the Sema-1a protein in humans has already been implicated in schizophrenia, although details of this protein’s role in disease remain unclear. “Our experiments affirm how important this protein is to study and understand,” adds Kolodkin.

Other authors on the paper include Sangyun Jeong and Katarina Juhaszova of The Johns Hopkins University.

This work was supported by funds from the National Institute of Neurological Disorders and Stroke (R01 NS35165) and the Howard Hughes Medical Institute.

To Stay Or To Go: Uncovering How Neurons Know Where To End Up