Results of study on rodents with Rett syndrome signal potential for dietary help for people with other autism spectrum disorders
Release Date: October 9, 2014 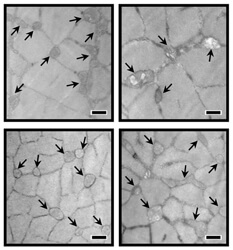 When young mice with the rodent equivalent of a rare autism spectrum disorder (ASD), called Rett syndrome, were fed a diet supplemented with the synthetic oil triheptanoin, they lived longer than mice on regular diets. Importantly, their physical and behavioral symptoms were also less severe after being on the diet, according to results of new research from The Johns Hopkins University.

Researchers involved in the study think that triheptanoin improved the functioning of mitochondria, energy factories common to all cells. Since mitochondrial defects are seen in other ASDs, the researchers say, the experimental results offer hope that the oil could help not just people with Rett syndrome, but also patients with other, more common ASDs.

A description of the research was published on Oct. 9 in the journal PLOS ONE.

ASDs affect an estimated one in 68 children under 8 years of age in the United States. Rett syndrome is a rare ASD caused by mutations in the MECP2 gene, which codes for methyl-CpG-binding-protein 2 (MeCP2). Rett syndrome includes autismlike signs, such as difficulty communicating, socializing and relating to others. Other hallmarks are seizures, decreased muscle tone, repetitive involuntary movements, and gastrointestinal and breathing problems. These other signs are also seen in some patients with other ASDs, suggesting underlying similarities in their causes. While the causes of most ASDs are unknown and thought to be complex, Rett syndrome is unique — and could be a source of insight for the others — because it is caused by an error in a single gene.

The research team used mice lacking the MeCP2 protein, which left them with severe Rett syndrome. In examining those mice, what stood out to postdoctoral fellow Min Jung Park, Ph.D., was that they weighed the same as healthy mice but had large fat deposits accompanied by lower amounts of nonfat tissue, such as muscle. This suggested to Gabriele Ronnett, M.D., Ph.D., who led the research project at the Johns Hopkins University School of Medicine, that calories were not being used to support normal tissue function but instead were being stored as fat.

This possibility led Ronnett and her research team to consider the role of mitochondria, which transform the building blocks of nutrients into a high-energy molecule, ATP. This molecule drives processes such as the building of muscle and the growth of nerve cells. Mitochondria use a series of biochemical reactions, collectively called the TCA cycle, to make this transformation possible. According to Susan Aja, Ph.D., a research associate and lead member of the research team, “If the components of the TCA cycle are low, nutrient building blocks are not processed well to create ATP. They are instead stored as fat.”

Ronnett suspected, she says, that some of Rett syndrome’s neurological symptoms could stem from metabolic deficiencies caused by faulty mitochondria and reduced energy for brain cells. “Rett syndrome becomes apparent in humans 6 to 18 months old, when the energy needs of the brain are particularly high, because a lot of new neural connections are being made,” says Ronnett. “If the mitochondria are already defective, stressed or damaged, the increased demand would be too much for them.”

Previous small clinical trials in people with a different metabolic disorder suggested that dietary intervention with triheptanoin could help. Triheptanoin is odorless, tasteless and a little thinner than olive oil. It is easily processed to produce one of the components of the TCA cycle.

When Rett syndrome mice were weaned at 4 weeks of age, they were fed a diet in which 30 percent of their calories came from triheptanoin, mixed in with their normal pelleted food. Though far from a cure, the results of the triheptanoin treatment were impressive, the researchers say. Treated mice had healthier mitochondria, improved motor function, increased social interest in other mice and lived four weeks — or 30 percent — longer than mice who did not receive the oil. The team also found that the diet normalized their body fat, glucose and fat metabolism.

“You can think of the mitochondria of the Rett syndrome model mice as damaged buckets with holes in them that allow TCA cycle components to leak out,” says Aja. “We haven’t figured out how to plug the holes, but we can keep the buckets full by providing triheptanoin to replenish the TCA cycle.”

“It is still too early to assume that this oil will work in humans with ASDs, but these results give us hope,” says Ronnett. “It’s exciting to think that we might be able to improve many ASDs without having to identify each and every contributing gene.”

According to Aja, additional mouse studies are needed to learn if female mice respond to the treatment, to perform a wider range of physiology and behavior tests, and, importantly, to assess the effects of triheptanoin treatment on the brain, which is considered the main driver of many Rett symptoms. The team would also like to provide triheptanoin at earlier ages, perhaps via the mothers’ milk, to mimic developmental ages at which most children are diagnosed with Rett syndrome.

Triheptanoin is currently made for research purposes only and is not available as a medicine or dietary supplement for humans.

This work was supported by research funds from Daegu Gyeongbuk Institute of Science and Technology Convergence Science Center, the National Institute of Neurological Disorders and Stroke (R01 NS041079), and Agilent Technologies.