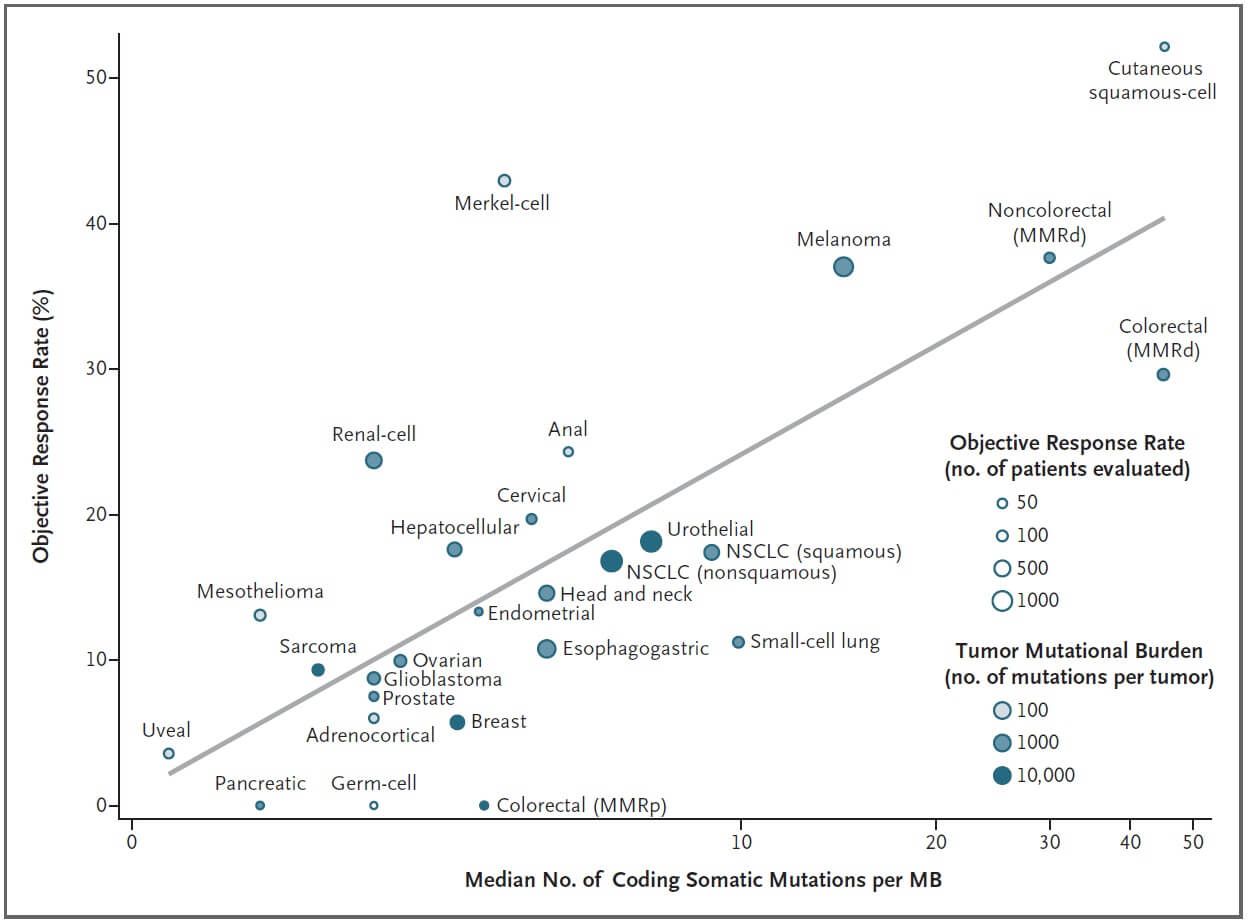 The “mutational burden,” or the number of mutations present in a tumor’s DNA, is a good predictor of whether that cancer type will respond to a class of cancer immunotherapy drugs known as checkpoint inhibitors, a new study led by Johns Hopkins Kimmel Cancer Center researchers shows. The finding, published in the Dec. 21 New England Journal of Medicine, could be used to guide future clinical trials for these drugs.

Checkpoint inhibitors are a relatively new class of drug that helps the immune system recognize cancer by interfering with mechanisms cancer cells use to hide from immune cells. As a result, the drugs cause the immune system to fight cancer in the same way that it would fight an infection. These medicines have had remarkable success in treating some types of cancers that historically have had poor prognoses, such as advanced melanoma and lung cancer. However, these therapies have had little effect on other deadly cancer types, such as pancreatic cancer and glioblastoma.

The mutational burden of certain tumor types has previously been proposed as an explanation for why certain cancers respond better than others to immune checkpoint inhibitors says study leader Mark Yarchoan, M.D., chief medical oncology fellow. Work by Dung Le, M.D., associate professor of oncology, and other researchers at the Johns Hopkins Kimmel Cancer Center and its Bloomberg~Kimmel Cancer Institute for Cancer Immunotherapy showed that colon cancers that carry a high number of mutations are more likely to respond to checkpoint inhibitors than those that have fewer mutations. However, exactly how big an effect the mutational burden has on outcomes to immune checkpoint inhibitors across many different cancer types was unclear.

To investigate this question, Yarchoan and colleagues Alexander Hopkins, Ph.D., research fellow, and Elizabeth Jaffee, M.D., co-director of the Skip Viragh Center for Pancreas Cancer Clinical Research and Patient Care and associate director of the Bloomberg~Kimmel Institute, combed the medical literature for the results of clinical trials using checkpoint inhibitors on various different types of cancer. They combined these findings with data on the mutational burden of thousands of tumor samples from patients with different tumor types.

Analyzing 27 different cancer types for which both pieces of information were available, the researchers found a strong correlation: the higher a cancer type’s mutational burden tends to be, the more likely it is to respond to checkpoint inhibitors. More than half of the differences in how well cancers responded to immune checkpoint inhibitors could be explained by the mutational burden of that cancer.

“The idea that a tumor type with more mutations might be easier to treat than one with fewer sounds a little counterintuitive. It’s one of those things that doesn’t sound right when you hear it,” says Hopkins. “But with immunotherapy, the more mutations you have, the more chances the immune system has to recognize the tumor.”

Although this finding held true for the vast majority of cancer types they studied, there were some outliers in their analysis, says Yarchoan. For example, Merkel cell cancer, a rare and highly aggressive skin cancer, tends to have a moderate number of mutations yet responds extremely well to checkpoint inhibitors. However, he explains, this cancer type is often caused by a virus, which seems to encourage a strong immune response despite the cancer’s lower mutational burden. In contrast, the most common type of colorectal cancer has moderate mutational burden, yet responds poorly to checkpoint inhibitors for reasons that are still unclear.

Yarchoan notes that these findings could help guide clinical trials to test checkpoint inhibitors on cancer types for which these drugs haven’t yet been tried. Future studies might also focus on finding ways to prompt cancers with low mutational burdens to behave like those with higher mutational burdens so that they will respond better to these therapies.

He and his colleagues plan to extend this line of research by investigating whether mutational burden might be a good predictor of whether cancers in individual patients might respond well to this class of immunotherapy drugs.

“The end goal is precision medicine—moving beyond what’s true for big groups of patients to see whether we can use this information to help any given patient,” he says.

Through a licensing agreement with Aduro Biotech, Jaffee has the potential to receive royalties in the future.