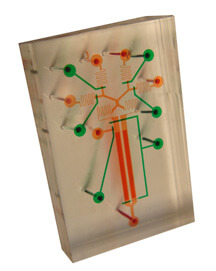 Johns Hopkins researchers have used a small synthetic molecule to stimulate cells to move and change shape, bypassing the cells’ usual way of sensing and responding to their environment. The experiment pioneers a new tool for studying cell movement, a phenomenon involved in everything from development to immunity to the spread of cancer.

“We were able to use synthetic molecules small enough to slip inside the cell and activate a chemical reaction controlling cell movement, bypassing most of the steps that usually lead up to this reaction,” says Andre Levchenko, Ph.D., a professor at the Johns Hopkins University School of Medicine’s Institute for Cell Engineering, whose lab collaborated with that of Takanari Inoue, also from the school of medicine, on the study.

“As a result, we came up with a new model to describe one of the more fundamental and important cellular processes and a better understanding of cell movements critical for cancer progression and immune response.” A report on the study was published Nov. 26 on the website of the Proceedings of the National Academy of Sciences.

Like bacteria wiggling through a drop of pond water, many types of human cells move too, including fibroblasts, which patrol the skin and make repairs; immune cells, which rush to the site of infections; and nerve cells, which must travel great distances during development, Levchenko says. Similarly, in order to metastasize or spread, a tumor’s cells must break off and migrate to a new part of the body.

Because of its role in cancer and immunity, these cellular dances are a hot area of research at present, Levchenko says. However, it is difficult to study the natural process for stimulating movement, in which signaling proteins bind to receptor molecules on the surface of the cell, setting off a complex chain reaction that ultimately propels the cell in a certain direction. In addition to the problem of complexity of the molecular interaction network, another difficulty is that cells decide which way to move by comparing the signal concentration on one side of the cell to the concentration on the other. “Stimulating a cell differently on one side than on the other side is not a trivial thing to do, because cells are incredibly small — about one-tenth the width of a human hair,” Levchenko explains.

To deal with the first problem, Benjamin Lin, a member of Levchenko’s team who led the study, joined forces with Inoue’s research group to take advantage of a novel method relying on a small molecule able to get between the fat molecules of the cell membrane and into the cell. Once inside, it would bind to two slightly modified proteins in the network that stimulates movement; the new complex of three molecules would in turn trigger the critical protein Rac, which falls somewhere in the middle of the choreographed chain reaction that leads to movement. By analyzing which enzymes in the chain reaction were ultimately activated by the synthetic molecule and which weren’t, the researchers could tell whether they were downstream or upstream of Rac in the chain.

To create a fine enough biochemical gradient of the synthetic molecule to guide a cell in a specific direction, the researchers built a silicone-based chip with tiny liquid-dispensing channels running along the surface. When they loaded the channels with a solution containing the synthetic molecule, and placed human cells on the surface, they could stimulate one side of a cell more than the other, and induce it to move. “Neither synthetic molecules nor microfluidic devices had been used before in this particular way, and the results exceeded all our expectations,” says Levchenko. “The cells responded very dramatically, moving in the direction we specified, and changing their shapes.”

In addition to providing researchers with powerful new tools for studying cell movement, the experiment is a step forward for the budding field of synthetic biology. “If a researcher decides to grow new tissue for transplantation, it could be useful to have a cue that enforces cell migration and assembly,” Levchenko says.

Why Many Cells Are Better Than One

On the web:
PNAS article