Finding could lead to treatment for Kabuki syndrome in people
Release Date: December 19, 2016 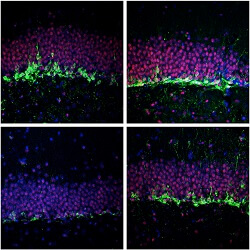 Experimenting on mice with a genetic change similar to that found in people with a rare inherited disease called Kabuki syndrome,  Johns Hopkins scientists report that a very low-carbohydrate diet can “open up” DNA and improve mental function.

Along with providing a potential treatment for memory and other intellectual losses seen in people with Kabuki syndrome, the study’s findings also suggest a new way of thinking about a category of genetic diseases known as Mendelian disorders of the epigenetic machinery, the researchers say. In these disorders, a genetic mutation causes errors in chemical tags on DNA or associated proteins, which in turn affect the rate at which DNA makes other proteins.

In the case of the Kabuki syndrome-like condition in mice, the researchers found that those errors lead to a persistent but treatable decrease in new cell growth in a memory-forming part of the brain. Their study, they say, also adds to growing evidence that some forms of inherited intellectual disability may be reversible.

The results of their experiments are described the week of Dec. 19 in an early edition of PNAS.

“Mendelian disorders of the epigenetic machinery affect how cells ‘package’ and use DNA, so they tend to have complicated and far-reaching effects,” says lead investigator Hans Bjornsson, M.D., Ph.D., assistant professor of pediatrics and genetics in the Johns Hopkins University School of Medicine’s McKusick-Nathans Institute of Genetic Medicine. “Finding a way to ease some of the symptoms in this group of rare disorders suggests that other such inherited disorders of the histone protein machinery may be treated in a similar manner.” Histones are specialized proteins that DNA wraps around to keep itself organized; the wound-up DNA and histones together are known as chromatin. Only by forming chromatin can several feet of DNA fit inside the tiny command centers or nuclei of each cell. But for a cell to read the DNA and put it to use making new proteins of its own, the chromatin must temporarily open up.

Bjornsson, who heads the McKusick-Nathans Epigenetics and Chromatin Clinic, has long focused his research on Kabuki syndrome, which is caused by mutations in one of two genes that govern histones. Specialized enzymes that act as “writers” and “erasers” add or subtract chemical groups to the histones to help induce the chromatin to open or close. In a recent study, Bjornsson and his collaborators found that the mutations that lead to Kabuki syndrome cause an imbalance between chromatin’s open and closed states, and that correcting that imbalance might alleviate some intellectually disabling symptoms of the condition.

A naturally occurring compound called beta-hydroxybutyrate (BHB) has already been reported to help open up chromatin. For the new study, the Johns Hopkins researchers tested whether two weeks of a low-carbohydrate ketogenic diet, which causes the body to naturally produce high levels of BHB, could alleviate symptoms in mice genetically engineered to have a Kabuki-like condition. The diet has long been known to have an impact on brain activity, particularly as a treatment for severe seizure disorders.

In their experiments, the researchers compared mice given the ketogenic diet to mice fed a normal diet and to those injected with BHB. Compared with their untreated counterparts, both groups of treated mice grew  more new brain cells in an area called the granule cell layer of the dentate gyrus, which is associated with the ability to learn and form new memories. They also performed nearly as well as non-Kabuki mice on a test known as the Morris water maze, which assesses the rodents’ ability to remember the location of an underwater platform on which to rest during a maze exercise.

Physicians generally consider the intellectual disability that accompanies disorders like Kabuki syndrome to be irreversible, Bjornsson notes. “But we now know that new brain cells continue to form throughout our lives. If Kabuki syndrome and related disorders cause fewer neurons to be made in adulthood, stimulating neuronal growth may be an effective strategy for treating intellectual disability,” he says.

Bjornsson cautions that the diet and BHB supplements have not yet been tested in people with Kabuki and those studies need to be done before any conclusions can be drawn about their effectiveness. He also warns that a ketogenic diet, which is similar but even more stringent than the commercial Atkins diet of the early 2000s, is difficult for most people to maintain. And he emphasizes that even if the diet or BHB supplements do work, they would at best boost some patients’ learning and memory, not cure the disorder. Bjornsson is now working with colleagues to devise effective tests to measure cognitive function and detect potential changes in the brains of patients with Kabuki syndrome. “We want to make sure we have good metrics in place before we try to test the diet in patients, so that we can see whether it makes a meaningful difference for them,” he says. “We hope to begin a clinical trial in a few years.”

According to the National Institutes of Health, Kabuki syndrome affects approximately 1 in 32,000 newborns. In addition to intellectual disability, it causes distinctive facial features, and sometimes seizures, an unusually small head size, weak muscles or other health problems.

This work was supported by the NIH Director’s Early Independence Award (grant number DP5OD017877) and a gift from the Benjamin family (no relation to the first author).