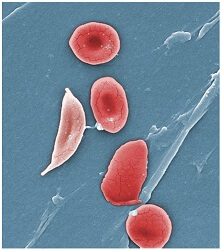 In a small study looking at pain assessments in adults with sickle cell disease, researchers at Johns Hopkins says overall, those treated long-term with opioids often fared worse in measures of pain, fatigue and curtailed daily activities than those not on long-term opioids.

In a report on the new research, published online on June 15 in a special sickle cell disease supplement of the American Journal of Preventive Medicine, C. Patrick Carroll, M.D., and colleagues evaluated pain experiences of participants with sickle cell disease who were prescribed long-term opioids.

“We need to be careful and skeptical about giving increasing doses of opioids to patients with sickle cell disease who are in chronic pain if it isn’t effective,” says Carroll, director of psychiatric services for the Johns Hopkins Sickle Cell Center for Adults and assistant professor of psychiatry and behavioral sciences at the Johns Hopkins University School of Medicine. “Too little is known about the effects of long-term opioid management of chronic pain.”

Sickle cell disease is a rare blood disorder that causes excruciating pain. It is a genetic disorder, predominantly affecting African-Americans in the U.S., and caused by a mutation in the gene that makes hemoglobin — the oxygen-carrying protein that gives the red pigment to red blood cells. In cells with the mutation, the hemoglobin forms long chains that cause the normally round and plump red blood cells to take on a sicklelike shape and clog up blood vessels. The clogged vessels can cut off oxygen to tissues and cause episodes of severe pain, known as crises. The pain from these episodes frequently drives people with the disease to emergency rooms, where they are aggressively treated for pain — usually with intravenous opioid pain medications.

Often, adult patients with sickle cell disease also develop chronic pain, and the way it manifests is poorly understood. Because advances in treatment of sickle cell disease have led to many more people living well into adulthood, chronic pain has been a growing problem for people with the disorder. These patients are also often treated with opioid pain medications for this chronic pain. However, there isn’t good evidence that long-term opioid therapy is effective. Animal research and some human studies suggest that opioids can paradoxically increase pain sensitivity. This concern, combined with rising awareness of the dangers of opioid therapy, particularly at high doses, has led to a re-evaluation of long-term opioid therapy for many conditions. However, those patients with sickle cell disease who have chronic pain often are prescribed high doses of opioids because the disorder is so hard to treat and recurrent crises can lead to escalating doses.

For the new study, the Johns Hopkins team recruited 83 people with sickle cell disease — 57 women and 26 men — over the age of 18, with an average age of 39. The physicians examined patient medical records to determine who was taking long-term opioids. Twenty-nine patients were prescribed daily, long-acting opioids to manage their pain by their health care provider, and 54 patients weren’t on long-term opioids.

The patients filled out daily electronic pain diaries for 90 days. Self-reported levels of pain, physical activity, fatigue and pain-related daily activity interference were recorded, along with self-reported levels of pain relief and medication satisfaction on a scale of 0 to 100. Patients with sickle cell disease and on long-term opioid treatment reported noncrisis pain intensities that were over three times higher than those not taking opioids. During crisis pain days, patients on long-term opioids also reported 32 percent higher levels of pain. Overall, patients prescribed chronic opioid therapy were more impaired, with over three times greater pain interference and twice the fatigue on noncrisis days, and 20 percent more pain interference and 33 percent higher fatigue.

In participants who were not on chronic opioid therapy, the level of central sensitization correlated with the level of noncrisis pain. However, in patients who were taking chronic opioid therapy and also had higher levels of central sensitization and clinical pain, the correlation essentially vanished. Carroll says this was surprising and suggests that the mechanisms of pain in sickle cell disease patients on long-term opioid therapy may be different in an unexpected way from that in patients who don’t take daily opioids for pain.

Carroll cautions that their work is preliminary and should not lead physicians or people with sickle cell disease to take away opioids that many need to control unbearable pain. One of the biggest challenges in sickle cells disease is that clinicians may not believe patients are in pain when there aren’t any signs of tissue damage or believe they are drug-seeking, and thus contribute to suffering.

“We need to better understand how long-term opioid use affects pain sensitization and determine if certain people are more sensitive to these effects so we can prescribe the best treatment option for each individual patient,” says Carroll. “We also need to learn more about how sickle cell disease may sensitize the nervous system.”

According to the Centers for Disease Control and Prevention, sickle cell disease affects millions of people worldwide and around 100,000 people in America. The frequency of hospitalizations for pain treatment makes sickle cell disease one of the most expensive conditions to treat in the American medical system.

The disease originated in Africa, India and the Middle East — tropical countries where malaria is prevalent. Those who carry only one gene for the disorder known as the sickle cell trait have some protection from malaria, whereas those who inherit two copies develop the classic and most severe form of sickle cell disease.