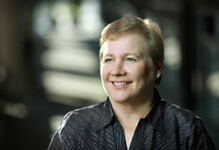 People within the Johns Hopkins community have long known that Lillie Shockney is an amazing nurse. Now she’s got the moniker to prove it.

Shockney, administrative director of the Johns Hopkins Avon Foundation Breast Center since 1997, was selected as this year’s “Amazing Nurse” in a national contest to celebrate and reward nurses’ value, sponsored by the Johnson & Johnson Campaign for Nursing’s Future. Shockney’s work with breast cancer patients was recognized by Johnson & Johnson during the 2011 CNN Heroes: An All-Star Tribute show in Los Angeles on December 11.

Shockney, a two-time breast cancer survivor and registered nurse who has been employed by Johns Hopkins since 1983, has worked tirelessly to improve the care of breast cancer patients around the world. She is responsible for the quality-of-care programs; patient education programs; the survivor volunteer team; community outreach at a local, regional and national level; the Breast Center’s Web site and patient advocacy. She also is certified as a breast cancer oncology nurse and a breast cancer patient navigator. In 2008, the Johns Hopkins Board of Trustees appointed her as the University Distinguished Service Assistant Professor of Breast Cancer – the first time in the history of the institution that a hospital nurse had received a distinguished service designation. She was promoted to associate professor in 2010.

“I am so excited about this,” Shockney said. “The title really made me feel good. I hope one of the outcomes is that more people making a career decision will consider nursing.”

Shockney also has a joint appointment at the Johns Hopkins University School of Nursing where she serves as a guest lecturer and distinguished speaker.  Marie Nolan, Ph.D., M.P.H., R.N., professor and chair of the Department of Acute and Chronic Care at the Hopkins’ School of Nursing, who has known Shockney for 25 years and nominated her for the award, said that as soon as she saw the title, she thought of Shockney, who exhibited exceptional leadership skills throughout her career.

“She is a phenomenon, an unstoppable force, a living example of how good can come from suffering and how much good can be accomplished,” Nolan wrote in her nomination letter. “Like a whirlwind, she has changed breast cancer treatment and survival at Johns Hopkins, in the U.S. and globally.”

“If you do a Google search on Lillie Shockney you will literally find tens of thousands of hits,” Nolan says. “Her impact is remarkable.”

Shockney initially was selected as one of 20 semifinalists from several thousand nominees. Johnson & Johnson asked voters to pick their favorite nominee on their contest’s Facebook page. “It became the cause célèbre at the School of Nursing,” Nolan says, “We were really behind her nomination and we wanted her to win.”

Shockney made the next cut, to five finalists, from which she was selected as the top winner by a panel of five national nursing experts.

Shockney holds a bachelor’s of science degree in health care administration from Saint Joseph’s College and a master’s in administrative science from Johns Hopkins University.

A published author and nationally recognized public speaker on the subject of breast cancer, she has written 13 books and more than 200 articles. She serves on the medical advisory board of several national breast cancer organizations and is the co-founder and vice president of a national non-profit organization called Mothers Supporting Daughters with Breast Cancer.

Shockney also is editor in chief of a peer-reviewed journal called Journal of Oncology Navigation and Survivorship, which launched in the spring; and has commented on breast cancer topics for national television networks, print and Internet media.  The 2011 “Amazing Nurses” award is Shockney’s 40th award.  She has received awards from the American Cancer Society, Lance Armstrong Foundation, Intel, Oncology Nursing Society and Susan G. Komen for the Cure Foundation, and other organizations.