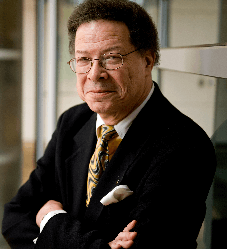 Levi Watkins Jr., a pioneer in both cardiac surgery and civil rights who implanted the first automatic heart defibrillator in a patient and was instrumental in recruiting minority students to the Johns Hopkins University School of Medicine, significantly enhancing the institution’s diversity, died on Saturday, April 11, in The Johns Hopkins Hospital of complications from a stroke. He was 70.

“Levi was known far and wide for his pioneering surgical work, his mentorship to so many young people, his advocacy for minorities and his service as a role model,” says Duke Cameron, cardiac surgeon-in-charge at The Johns Hopkins Hospital and professor of surgery in the Johns Hopkins University School of Medicine.  “And he was a powerful spiritual leader to countless others. He probably spoke at as many churches as he did at medical meetings.”

Lisa Cooper, director of the Johns Hopkins Center to Eliminate Cardiovascular Health Disparities, a MacArthur Foundation “Genius Grant” recipient and a longtime protégé of Watkins, recalled that Watkins would “give the benediction” at every event he attended, medical or otherwise. “He spoke like a Baptist preacher. He was dynamic and funny — and I always used to dread if anybody asked me to make remarks after Dr. Watkins, because you just did not want to come after him,” Cooper says.

“Levi remained as powerful a presence and as important an influence on Johns Hopkins as he was when he arrived here in 1970 as a general surgery intern,” says Paul B. Rothman, dean of the medical faculty, vice president for medicine of The Johns Hopkins University and CEO of Johns Hopkins Medicine.

Ronald R. Peterson, president of The Johns Hopkins Hospital and Health System and executive vice president of Johns Hopkins Medicine, recalls that when he arrived at The Johns Hopkins Hospital as an administrative resident in 1973, it was much like it had been when Watkins arrived in 1970. “It was a great place then — but it is a far, far better place now: more diverse, more innovative, more connected to the community that surrounds us, more welcoming. We have Levi Watkins to thank for a lot of those changes.”

"It is inarguable that Levi’s impact on our hospital — on its culture, on its care — will endure, just as will our immense admiration for him and thanks for all that he did here.”

Watkins, who retired in December 2013, was present last Jan. 9 when Rothman and Peterson presided over the official unveiling of his oil portrait during Johns Hopkins’ 33rd annual Martin Luther King Jr. Commemoration event, which had been founded by Watkins in 1982, and which he continued to host every year.

He died just a week after the portrait was formally installed in the Division of Cardiac Surgery, says Cameron. “Levi died among his friends and colleagues, and was cared for by people whose careers he inspired and deeply influenced.”

Born in Parsons, Kansas, Watkins was the third of the six children of a college professor who moved the family to Alabama to take a job with Alabama State University. The minister of the family’s church in Montgomery was the Rev. Dr. Ralph David Abernathy, an early civil rights leader. In high school, the younger Watkins joined the Dexter Avenue Baptist Church, led by the Rev. Dr. Martin Luther King Jr., who became a powerful mentor to him.

After graduating from Tennessee State University in 1966, Watkins became the first African-American to be admitted to and then graduate from Vanderbilt University School of Medicine. After arriving at Johns Hopkins as a general surgery intern in 1970, he rose to become the first African-American resident in cardiac surgery. Following postdoctoral research at Harvard University between 1973 and 1975, he returned to Johns Hopkins as a cardiac surgery fellow and joined the faculty in 1978.

In 1980, Watkins gained renown for implanting the first automatic heart defibrillator in a patient suffering from repeated, life-threating episodes of ventricular fibrillation, or irregular heartbeats. Such a procedure now is commonplace, saving untold lives annually.

From his earliest days at Johns Hopkins, Watkins played a pivotal part in changing its role in medical education. In 1975, at the request of the newly appointed school of medicine dean, Richard Ross, Watkins and a fellow African-American faculty colleague, ophthalmologist Earl Kidwell, a 1973 Johns Hopkins University School of Medicine graduate, launched a concerted nationwide drive to recruit talented minority students who were interested in studying medicine. Within a few years, Johns Hopkins was attracting black students from all over the nation, convinced by Watkins that Johns Hopkins wanted them. The success of the Johns Hopkins minority recruitment campaign soon made it a model imitated by other medical schools.

In 1983, he was appointed to the medical school’s admissions board, and the recruitment, retention and graduation rates for minorities steadily climbed. Each year, Watkins hosted a reception for black students, house staff and faculty, which grew from 10 or so attendees in the 1970s to more than 100 by the mid-1990s.

In 1991, Watkins was promoted to full professor of cardiac surgery and vice dean for postdoctoral programs and faculty development. He would have an immense impact on postdoctoral education in the country by establishing the nation’s first postdoctoral association at Johns Hopkins, another pioneering effort that has been emulated elsewhere.

Along with Cooper, among the many leading physicians whom Watkins mentored at Johns Hopkins are Selwyn Vickers, who in 2013 became the first African-American senior vice president and dean of the University of Alabama at Birmingham School of Medicine, and James E.K. Hildreth, renowned for his important research on HIV and AIDS. Hildreth now is dean of the College of Biological Sciences at the University of California, Davis.

“He was one of those people whose personality and spirit were so warm, inviting and exciting. His humor and ability to make you feel welcome and bring levity to situations that are very difficult to deal with — and his courage, for speaking out about things that other people wouldn’t speak out about — were just a few of the things I admired so much about him,” says Cooper, who came to Johns Hopkins in 1991 as a fellow in internal medicine and joined the faculty in 1994.

That’s what helped to keep me moving forward, knowing that he was going to be there and support me. He was somebody who gave so much encouragement to so many people through all of his different efforts — such as the Martin Luther King celebration and all the different activities he had for students, new trainees and faculty. He had so much strength and courage.”

Watkins received honorary degrees from Morgan State University, Spelman College, Meharry Medical College and Sojourner-Douglass College. His life and work were featured on a 1993 Public Television Systems’ The New Explorers program episode titled “A Dream Fulfilled,” and three years later again on Maryland Public Television. In 2013, the American Heart Association established the Watkins-Saunders Award, recognizing excellence in medical and community work focused on diminishing health care disparities in Maryland and named in honor of Watkins and University of Maryland cardiologist Elijah Saunders, who died on April 6 of cancer at the age of 80. Lisa Cooper was the first recipient of the award.

In 2006, Watkins’ then 35-year career at Johns Hopkins was celebrated with a mammoth reception.

At that celebration, Watkins recalled: “I came up when color was everything.” Gazing at the diverse crowd gathered to applaud him, he said, “But looking out at all of you today, I don’t see color at all.”

Gifts in memory of Watkins can be made to the Levi Watkins Jr., M.D., Endowed Scholarship Fund at the Johns Hopkins University School of Medicine. Please make checks payable to Johns Hopkins University and include a note that the gift is in Watkins' memory. Send gifts to School of Medicine Development Office at 750 E. Pratt St., 17th floor, Baltimore, MD 21202. Gifts can also be made online at https://secure.jhu.edu/form/somt. Please call 410-361-6533 with questions.