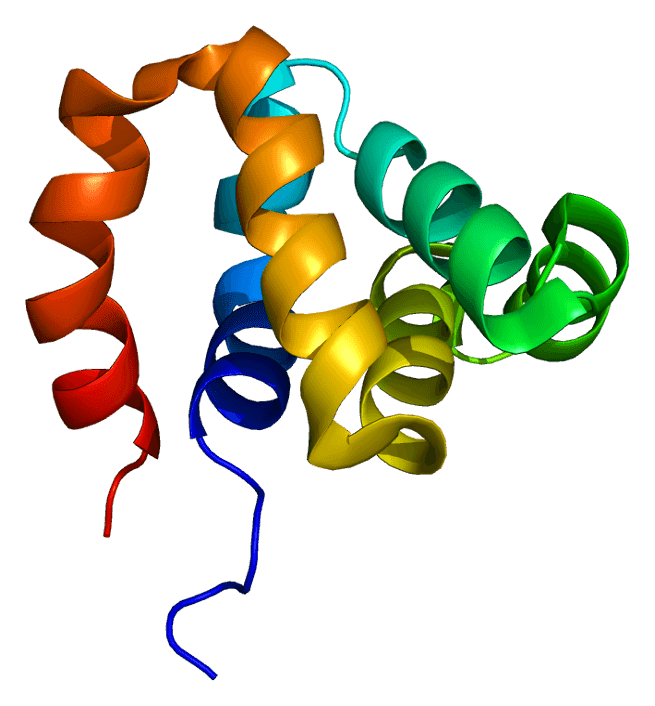 Illustration of the NOD1 protein. Researchers have found that a genetic mutation that alters NOD1’s structure may increase susceptibility to human cytomegalovirus.
Credit: Wikimedia user EMW. Permission is granted to copy, distribute and/or modify this document under the terms of the GNU Free Documentation License, Version 1.2 or any later version published by the Free Software Foundation; with no Invariant Sections, no Front-Cover Texts, and no Back-Cover Texts. A copy of the license is included in the section entitled GNU Free Documentation License. For the full image credit please view the downloadable attachment.

Experimenting with human cells and mice, Johns Hopkins researchers have found that a genetic mutation that alters a protein called NOD1 may increase susceptibility to human cytomegalovirus (CMV) infection. CMV is a common pathogen that infects almost 60 percent of adults in the U.S., according to the Centers for Disease Control and Prevention (CDC), and can lead to devastating developmental defects in fetuses and severe disease in people with weakened immune systems.

In a report on the new research, published Nov. 14 in the Proceedings of the National Academy of Sciences, the Johns Hopkins team says it now has what it believes is the first evidence that NOD1, a protein with a well-known role in inducing the innate immune response, has an integral role in the control of CMV and that certain variants of it may create higher risk of CMV infection.

“Our results suggest that this protein explains why not every person is at the same risk for CMV, and that we might someday be able to develop tests to identify and manage those who are at an increased risk for CMV-related disease,” says Ravit Boger, M.D., associate professor of pediatrics at the Johns Hopkins University School of Medicine.

Building upon previous research, in which Boger’s team identified NOD2 as a protein that controls CMV, its sister molecule, NOD1, was shown to also be important in the control of CMV infection in the new study.

In studies with human fibroblasts that make up connective tissue, Boger’s team tested whether NOD1 activity could affect CMV replication in cultures of cells grown in the lab.

To do this, the researchers upregulated NOD1 by treating the cells with a bacterial fragment. They also genetically engineered cells to contain nonfunctional forms of NOD1. The results showed that cells in which NOD1 was activated had decreased levels of CMV replication compared to controls.

In mouse experiments, the researchers treated the animals with two doses of iE-DAP, another bacterial NOD1 activator, and subsequently infected them with mouse CMV. Two weeks later, organs and intracardiac blood were collected from the mice and grown in dishes. The cells were monitored for areas of cell death, an indicator of viral activity. Compared to control mice not treated with the NOD1 activator, virus replication in iE-DAP-treated mice was significantly reduced.

Boger cautions that NOD1 is not the only factor in determining risk of CMV infection and that this is simply one piece of a larger puzzle in determining risk. She says her team must now investigate the cell signaling pathways involving the NOD proteins to precisely pin down how NOD1 and NOD2 interact with CMV and the other systems within our cells.

“We do not yet know how NOD1 accomplishes this function, or if NOD1 and NOD2 coordinate or work independently in the control of CMV,” says Boger.

CMV is transmitted from person to person through body fluids and can infect people of all ages, though nearly one in three people has the virus by age 5. Most people show no signs or symptoms of infection, while others develop such symptoms as a fever, sore throat and fatigue. One in 150 babies in the U.S. is born with a congenital CMV infection, and of those, one in five suffers from complications, according to the CDC, which can include including hearing loss, vision loss, cerebral palsy, cognitive impairments and microcephaly.

CMV has not drawn the same attention in the medical and scientific community as the much less common Zika virus, despite causing similar neurological complications, says Boger.

In addition, CMV causes colitis in individuals with Crohn’s disease and patients with suppressed immune systems, making it a significant risk to transplant recipients.

This research was supported by the Johns Hopkins Institute of Clinical and Translational Research. Genotyping services were provided by The Johns Hopkins University under NO1-HV-48195 from the National Heart, Lung, and Blood Institute.

The full image credit for this news release is available for download.